New Article By Da Boomsha – Fear Is The New Black 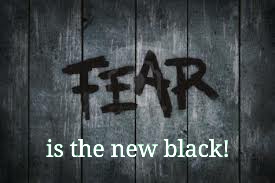 I remember the night the fires started..Some called it
“The Night of The Long Knives”..The Natives called
it ” Ashare” an hausa word meaning ‘Sweep them’
“We didn’t have a name for it.. maybe because we
couldn’t find the words.. Horror is hard to describe..
For those who have experienced it firsthand.. Its a nameless thing..We were so unprepared for it..

Kaduna had always been a peaceful town.. A few
moments of tension every now and then.. but
nothing serious.. We had heard about the Zaria riots
in the 80s but always referred to it as a far removed
event.. Except for the Zango-Kataf Riots..That was
an eye-opener.. All that carnage and bloodshed made us resolve to prevent a re-
occurrence..Kaduna people were peace-loving..or
so we thought

So the night they came.. We were all tucked into the
sheets.. fast asleep.. They came with the name of
God on their lips and murder in their hearts.. The
sound of feet on our rooftops and banging on our
doors interrupted our dreams and jarred us awake.
The screams of terror that rent the midnight air drove away the last shreds of sleep that clung to
our eyelids and had us scrambling for safety..
anywhere we could find it..

Some of us were fortunate.. We found secret places
to hide.. In toilets..inside ceilings..nearby
bushes..inside wells..yes..anywhere we could
disappear into.. but many of us died that night..
Slaughtered in our beds like animals.. Shut up in
our houses as they razed them to the ground.. Daughters and mothers raped and dehumanized..
Father’s and sons cut down by machetes, arrows,
sickles and other weapons.. All in the name of God

The rampage continued till the early hours of the
morning then they left..we crawled out of hiding
and having gathered a few essentials from our
belongings.. We made a beeline for the nearest
army barrack.. Corpses littered the streets
everywhere we turned.. As we walked we swapped horror stories and gaped at the ghastly
scenes of havoc before our very eyes.. The attacks
had been co-ordinated and carried out simultaneously in different parts of the city.. Terror
had visited Kaduna and left sorrow, tears and
blood in its wake..

To be honest, there were reprisal attacks from the
other side..”Vengeance is mine” Says The Lord, but
Man is always quick to shed blood on God’s behalf..
Violence only begets more violence..That night
sparked off a vicious circle of violence that almost
broke the spirit of the city of my childhood.I’m glad we survived..Our city is in recovery..peace is
gradually returning to Kaduna..but some of us still
carry the scars..on our shoulders.. backs..minds..
souls.. We have nightmares..flashbacks.. panic
attacks..and a truckload of bitterness.

Like JP Clarke put it in his poem “The casualties are
not only those who have died or await death by
instalments.. We are all casualties..” Terror is no
respecter of region, tribe, country or race. From
Borno to Paris, from Yola to Mali, Terror is
everywhere. Any man is capable of terror if he embraces the darkness that constantly seeks to
creep into his soul. Fear is the New Black and Good
is the New Bad..but we must not bow to terror. We
must smile in the face of fear..We must choose to
live.. And We must love in the Name of God..