New Article By Da Boomsha – With Love From Sambisa 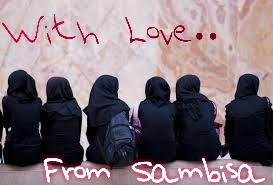 With Love From Sambisa

A Nigerian Soldier stood at the edge of Sambisa
Forest watching as his platoon members slept,
wrapped in their army blankets with their boots on.
It was a cold night..December nights in Maiduguri
were cold enough to make polar bears jealous..It
was colder than a dog’s nose.

The soldier huddled closer to the camp fire as he
stirred the flames. Shadows crossed his face as
memories flooded his mind. It was christmas
time..and he was far from home. His wife would be
frying chicken tonight as his children blew balloons
and stole chinchin from the kitchen..Oh.. How he missed his family!

The war on terror seemed endless. The more of the
terrorists they killed.. The more they seemed to
increase. He was bone-tired and home-sick. He just
wanted to be home.. at least for Christmas. He
scowled as he recalled stories about the diversion
of funds meant for military equipment. “May Dasuki rot in the hottest part of hell for his wickedness!” He
swore.. So many of his comrades had fallen in
combat under superior fire.. They had been so ill-
equipped.. He spat into the fire as he cursed..

In another part of Sambisa, a terrorist swapped
stories with his colleague..Worried looks on their
faces..This year hadnt been a good year for them.
They had sustained heavy losses and so many of
them had died. It was hard getting new recruits
due to the weight of public opinion against them..They had lost moral justification and now
received widespread condemnation due to their
incessant bloodletting and abduction of women
and children. .

Even some of their sponsors had stopped sending
money out of fear of being discovered by the NSA.
The bloody cowards! Lily-livered politicians! But
things were looking up though.. Their alliance with
ISIS held a promiss of better days.. And if it all went
south.. Well.. They would all go out with a big bang (No pun intended) and fly skywards to their
seventy virgins in paradise.. He laughed devilishly
as his comrade cracked a joke about wearing a
santa claus costume and dropping off  bombs in people’s home wrapped as Christmas
gifts for the kids..

Bika heard him laughing from the tent and
shuddered.. Her husband was as cold hearted as
they came! She hated him with every fibre of her
being. She had prayed for God to give her a
benevolent benefactor.. someone who would
make sense out of the nightmare that had become her life.. Since that fateful night when she and 299
other girls had been abducted from Chibok..

She had gotten him instead..and her life had
become an endless cycle of pain. Forced into sex..
Forced into marriage.. And now forced into
Motherhood.. Her life had been ravaged by a
malevolent whirlwind called Terror. Its astonishing
how your whole life could change in one moment.. She cradled her baby in her arms and sobbed.. So
much for Christmas! She wondered if anybody still
remembered.. If anybody would spare a thought
for Bika at Christmas.. the girl from Chibok who
never returned from school..

If she could, she would put her tears in a bottle and
send it to the good people of Nigeria..”With love
from Sambisa”