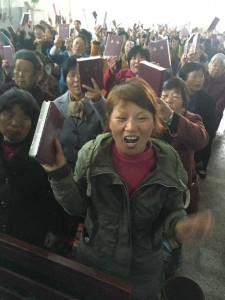 “The need that exists is not a need that goes away … The new believers that are coming to Christ probably exceed the number of Bibles that we’re able to deliver,” Bibles for China’s Wendell Rovenstine explains.

Those 10,000 Bibles were just a drop in a bucket. Truthfully, it’s a great problem to have. But, it’s a problem because these churches are continually sharing the Good News with others. Some churches are even reaching out to communities suffering from HIV and AIDS.

“They are teaching. They are training. They’re
involved in ministry. They’re speaking the Truth.
They’re inviting people to Christ. It’s a pretty
healthy body of believers that have a great need
for God’s Word,” Rovenstine says.

As Rovenstine and other team members prepared
to leave China and head back to the United States,
church leaders asked him if the next time he came,
that he would bring even more Bibles. To answer
this request, Rovenstine is inviting you to come
and walk alongside China’s churches, too.