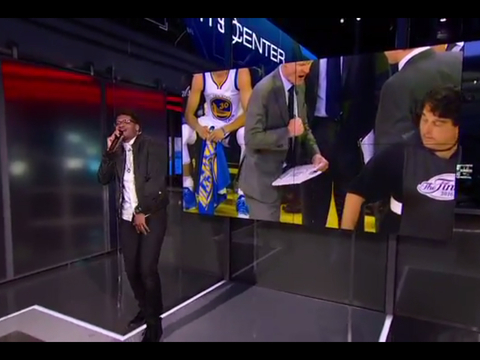 Christian emcee Christon Gray appeared on
ESPN after game one of the NBA Finals
matchup of the Golden State Warriors vs. the
Cleveland Cavaliers to rap the game one
recap.

Gray was one of ESPN’s featured artists of
the month, and appeared on the segment’s
Vocal Point, where he created a rap to
explain the highlights of the game.

Watch the segment below:

Gray’s new song “Stop Me,” was also on
ESPN in March, as the background music to
Curry dropping 3’s in a highlight video.
“Stop Me” is track No. 2 of his new LP The Glory Album.

“Stop Me,” along with The Glory Album
songs “The Glory, Pt. 1” and “Open Doors
(See You Later)”, were selected by ESPN as its March music of the month.