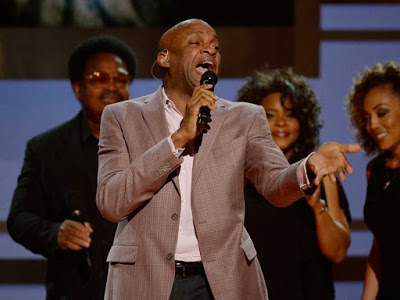 When Songz, the 31-year-old R&B singer who
was born as Tremaine Aldon Neverson, took
the same flight as gospel singer McClurkin as
they were headed to Nigeria, the latter sang his
praises.

“Flew in together from Nigeria with one of the
greatest young men @treysongz go bless him,”
McClurkin shared on Instagram. “It was a pleasure meeting you, young man! Love you
and praying for you!”

While he’s a leading voice in gospel music,
McClurkin previously told The Christian Post that he enjoys secular music in the same way
that secular musicians enjoy gospel songs.

“When Golden Gate Jubilee Quartet were out,
that was gospel music and then when Mahalia
Jackson was out they called that Rock and Roll.
That was Mahalia singing the Blues. … She
clapped her hands and switched her hips
when she sang,” McClurkin added. “She brought in a band with drums and music. Now
we consider Mahalia Jackson traditional

He continued: “Now, Andraé Crouch and The
Hawkins are traditional because the Winans
came along. The Winans are now considered
traditional because Kirk Franklin came along.
It’s always been progressive. So this new
group of gospel musicians like Tasha Cobbs, Jonathan McReynolds, and people like Isaac
Carree and Zacardi Cortez, James Fortune and
the list goes on … they’re picking up where we
left off.”

While the pastor and gospel singer is excited
about the current state of gospel music, he
admits that it is not always easy to sell records
in the gospel music industry.

“It is still the most powerful music form that’s
out there. Now the state of the music industry
makes it hard for gospel because the music
industry has changed so much with all the
technologies that people don’t know how to
sell records anymore,” the veteran artist said. “We don’t know how to sell our product
anymore. So good product is being unheard
because we haven’t learned to catch up with
the technology of the day.”

Still, the Camdon Music label head believes the
artform that he loves will continue to thrive.