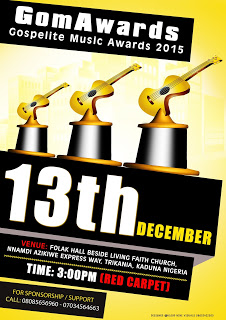 The 3rd Annual Gospelite Music Awards
(GomAwards) 2015 which took place on 13th
December, at FOLAK HALL, Trikania,
Kaduna State may have come and gone, but the
memories of the Award event will still be in the
heart of many. Most especially the surprised STAGE PERFORMANCE by TOKKIDA SEMLEK (CEO
GomAwards).

It was shocking when Tokkida Semlek and
Southboy Curtis performed their yet to be released
single “SHEGE”, amidst cheering crowd. It was a
DOPE, ELECTRIFYING and WELL DELIVERED
performance.

The event was in fulfillment of its theme “GREATER
TOGETHER”. It gathered young and old Gospel
artistes and music lovers, which gave them an
opportunity to mingle and network.

Our delectable Red Carpet Host COMFYSWIZZ added
colour/glamour to the event. It was indeed a night
of Glitz, Glamour, Glitter, Style and Fashion in
Kaduna State.

A total of 17 competive awards were won and 6
Non-competetive awards (Special Recognition
Awards, Gospelite Distinction Awards and Gospelite
Man of the year)

The event was organized by TOK86 INTL to
Celebrate, recognize, appreciate and promote
talented Gospel artistes.

GOSPELITE MAN OF THE YEAR