News: Mega Church Closes With No Mention That It Was The Last Service 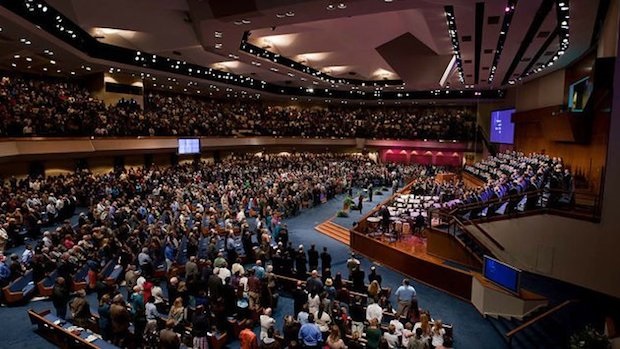 A choir sings at the beginning of the last worship service held at North Heights Lutheran Church in Arden Hills Sunday morning, March 13, 2016. The church has had a major schism and is shutting down. (Pioneer Press: Scott Takushi)

After 70 years of funerals, a church held a
funeral for itself Sunday.

North Heights Lutheran, the former
megachurch of Arden Hills, closed permanently
after a service that puzzled and stunned
parishioners.

“This is like a divorce, or anything else that is
going to mean a lifetime of healing,” said
church member Zelda Erickson.

“God is still on the throne. But maybe God
wants us to go to another church.”

The congregation did not know that the
church’s staff, including pastor Mindy Bak, had
been fired on Thursday. But Bak showed up
anyway, and after she said the last tearful
goodbye, she left for good.

“I am done here. I came this morning as a
volunteer,” Bak said by phone after the service.

The church was once one of the biggest in the
state, with 3,400 attending services weekly.
About 10 years ago, attendance and income
started to slide. In June, Bak laid off half of the
88-person staff and shut down a satellite
church in Roseville.

Immediately, the church split. Roughly two-
thirds of the congregation left and began
holding services in a nearby hotel under the
name “Bondservants.”

On March 6, before a crowd of about 250, Bak
announced the closing of the church. Twice
that many showed up Sunday — for a service
that seemed to show a church in denial.

There was no mention that it was the last
service. There was no sermon, no nostalgic
look back at the past 70 years, not a single
goodbye or even a thank-you.

The service was almost entirely music from the
seven-piece house band and the 60-voice
choir. The only hint that something was wrong
was in the readings and hymns.

During one prayer, the line, “A time to be born
and a time to die” from Ecclesiastes 3 caused a
ripple in the congregation. When a line from
another song appeared on the 40-by-30-foot
screen — “greater things are still to come here”
— spontaneous applause erupted.

Churchgoers enter the building for the last worship service in North Heights Lutheran Church in Arden Hills on Sunday, March 13, 2016, as the church has had a major schism and is shutting down. (Pioneer Press: Scott Takushi)

Church leaders have not told parishioners why
it is shutting down, or what the church’s
financial condition is. They have not said what
will happen to the 43-acre church campus and
the 1,350-capacity sanctuary.

The church’s K-8th-grade school will be open
at least through the end of the school year, Bak
said.

Bak’s term as senior pastor was short, she said
by phone after the service, as the terms of
previous pastors have been. “One of the things
that churches in a death spiral do is consume
leaders at an ever-hastening pace,” she said.

Out of 88 employees a year ago, said Bak, only
three remain. “They will handle the final stages
of the closure, or whatever else happens,” Bak
said.

Some reporters and photographers were
ejected during the service. Three security
guards surrounded Bak at the end of the
service, as congregants waited in line to hug
her goodbye.

They used the same word repeatedly to
describe the service: unbelievable.

“The message here is, ‘This doesn’t feel good.
We don’t like it,’” said Mark Johnson, a choir
singer and 15-year church member.

He isn’t sure what he is going to do on Sunday
mornings. “I am looking for a place where God
can use me,” Johnson said.

Some church members believe the church is out
of money.

Church member David, a Minneapolis
remodeling contractor who didn’t want to give
his last name, said, “We got into debt, and we
can’t resolve our differences. It’s a little
embarrassing. This is not who we are
supposed to be.”

Others blamed the members of the breakaway
group, which held two services Sunday. But
some said they were eager to join that
church next Sunday.

Church member Erickson found the all-music
service inspiring. She is moving on — although
not as a part of the church. “I think the Lord
allowed this. We are all supposed to be
searching our lives right now,” Erickson said.

Sandra Olmsted was not at the service. She is a
21-year member who now worships with the
Bondservants.

She said the closure of the church doesn’t mean
it is dead. “Just because the keys are turned
over to the bank doesn’t mean they are
disbanded,” Olmsted said.

“There in no sense that this congregation is
going away. We have just had some very poor
leadership driving a wedge between us.” It
might be possible, she said, that somehow the
Bondservants could re-occupy the building.

But in the parking lot, stunned worshippers
stood around aimlessly as earthquake
survivors.

Three of them gathered by a minivan, trying to
figure out what just happened.

One recalled the Old Testament tale of Solomon,
who ordered that a baby be cut in half and split
between two women — knowing that the true
mother would give up and let the healthy baby
go to the other woman.

North Heights, said one parishioner, has been
pulled apart because neither side loved it
enough.

“They just split the baby,” she said.