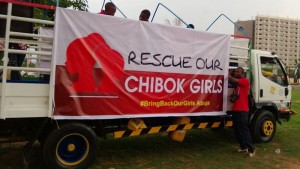 LAGOS, Nigeria (New York Times)— One of the girls kidnapped by Boko Haram more than two years ago during a mass abduction at a school in Nigeria has been found, community leaders in the area said on Wednesday.

The girl, Amina Ali, was wandering in the forest when members of a vigilante group lying in wait to ambush a Boko Haram camp came across her, said Aboku Gaji, a local vigilante commander.

The kidnapping of nearly 300 girls during exam time at their boarding school in the Nigerian town of Chibok shocked the world and helped galvanize pressure on the government to fight Boko Haram, an Islamist militant group that has terrorized parts of northern Nigeria for years.

Some girls managed to escape shortly after the fighters stormed their school and hauled their
classmates away. But Ms. Ali is the first girl to be
found since the early days of the episode.

More than 200 girls who were taken from the
school on April 14, 2014, are still missing. The
mass abduction was one of the most notorious
acts by a group that has rampaged through the north of Nigeria, burning entire villages and carrying out rapes, beheadings, lootings and
other acts of violence. 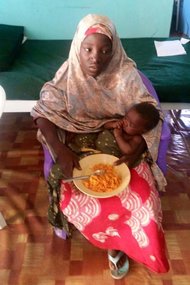 The inability to find and rescue the girls has been a political embarrassment for President
Muhammadu Buhari and for the Nigerian
military, which has made recent gains in fighting Boko Haram and releasing entire towns from its
control. Mr. Buhari planned to meet with Ms. Ali in
Abuja, Nigeria’s capital, on Thursday.

A military spokesman on Wednesday said that
one of the Chibok girls was among a group of
people rescued by troops, claiming credit for the
recovery.

According to the vigilante commander, Ms. Ali
was with a baby and a man described as her
husband. The commander said that the husband
had been captured by militants as well, and that
the two married while being held by Boko
Haram. The couple apparently escaped the militants’ camp.

But in a news release late Wednesday, the
military said the man was in fact a suspected
Boko Haram terrorist who claimed to be the girl’s
husband. The release described Ms. Ali as a
nursing mother with a 4-month-old baby, a girl
named Safiya.

Members of the vigilante group took Ms. Ali to
Chibok, where her mother saw her and
confirmed her identity, Mr. Aboku said. Other
members of the community of Chibok also
confirmed that Ms. Ali had been found. She told
her family that the other girls from Chibok were still in the forest but that six of them had died.

Ms. Ali was in the custody of the Nigerian military
in the town of Damboa, according to Mr. Aboku.

Hassan Usman, a Chibok resident whose niece is
among the abducted schoolgirls, said he had
seen the rescued girl arrive in Chibok in a car
driven by local vigilante members from the
neighboring town of Mbalala, where her family
lives. The vigilantes took Ms. Ali to the marketplace in the town’s center, the same place
a suicide bombing took place earlier this year.