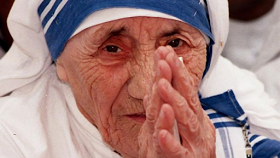 Pope Francis will on September 4th this year
declare Mother Teresa of Kolkata a Saint. Mother
Theresa who is affectionately known as the “saint
of the gutter” for her unconditional love for the
poor, abandoned and marginalized, was beatified
in 2003 by Pope John Paul II after being attributed to a first miracle, answering an Indian woman’s
prayers to cure her brain tumor, according to the
Vatican.

Born Agnes Gonxha Bojaxhiu on August 26,
1910, in Skopje, in what is now Macedonia, Mother
Teresa died in Kolkata, formerly Calcutta, on
September 5th 1997.