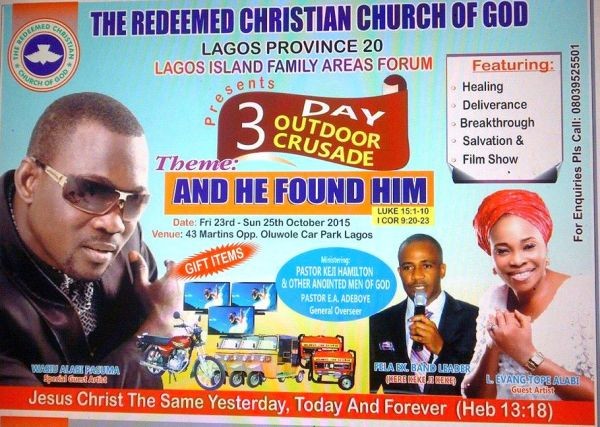 The Redeemed Christian Church of God (RCCG)
through its provincial headquarters on Lagos
Island has cancelled a three-day outdoor crusade
of one its parishes.

The cancellation came after the criticism that
followed the invitation of the Fuji musician Wasiu
Alabi Pasuma as a guest artist for the crusade. 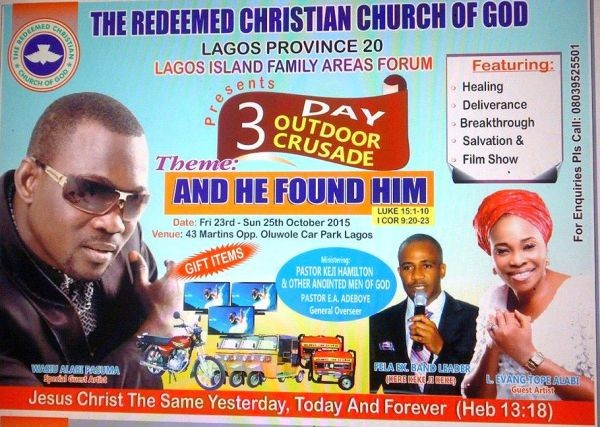 Naij.com gathered that the decision to stop the
programme was because the church headquarters
felt the idea to bring Pasuma and his fans to the
church was not well conceived. A source who
spoke on condition of anonymity said the
organisers did not do a detailed consultation before going ahead with the programme.

He also said that as a result the programme has
been cancelled and the pastor in charge of the
church along with the organising committee has
also been suspended as they now await sanction
for dragging the name of the church into the mud.

Naij.com further learned it was a fan of the Fuji lord
who worked at the press where the posters and
fliers were being printed who leaked the artwork
of the posters and fliers of the event.

A few months ago a church was criticized for
inviting a secular singer, Mavin Records’ Korede
Bello, to perform his hit single ‘Godwin’ during the
Sunday service.