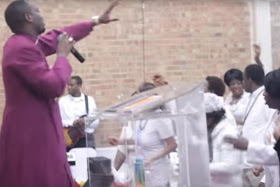 A South London Church has been fined thousands
of pounds for holding noisy 3am services aimed at
fending off ‘evil spirits, deliverance from sickness,
financial hardship and demonic soul ties.’

Magistrates have ordered the leaders of
Camberwell’s Kingdom Church, a branch of the
Bishop Climate Ministries, to pay £7,740.50. This
happened after the Southwark Council was
flooded with complaints from nearby residents
about the services every Saturday morning.

Church leaders were slapped with the fine at
Camberwell Magistrates Court after being found
guilty of two charges under Section 80 of the
Environmental Protection Act 1980. The church
has however decided to appeal the fine. A
spokesman said, “It is a big fine and we will be appealing against it. I do not deny that we made
some noise – we did. But we have spent nearly ten
thousand pounds reducing the noise.”