News: US Pastor, Steven Anderson Banned From South Africa, Says He Feels For People There 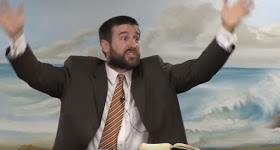 The controversial US pastor Steven Anderson who has just been banned from entering South Africa has said on Facebookthat he feels “sorry
for people who live in South Africa”, saying that religious freedom no longer exists there.

He added: “Thank God we still have a wide open door in Botswana. Stand by for reports of MULTITUDES saved in Botswana.”

He was banned for alleged homophobic remarks

South Africa’s Home Affairs Minister Malusi Gigaba
said he could not enter the country because he would have engaged in hate speech.

Pastor Anderson said in a video posted on You Tube before today’s decision that the trip to South Africa was not going to be about homosexuality, and he stood by his views
against homosexuality, which he said were endorsed by the Bible.

In another video, he said that in a way he had already entered South Africa as a lot of people are now talking about him.