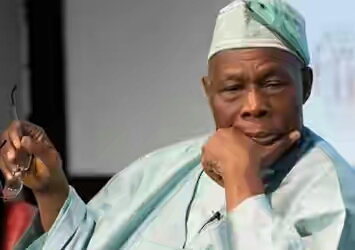 Former President Olusegun Obasanjo on Tuesday said Nigeria had no excuse for the deplorable state of its agriculture sector.

Obasanjo said this at an agriculture seminar in Abuja organised by Lift Above Poverty Organisation (LAPO), a Non-Governmental Organisation (NGO) with “Food Security and Sustainable Agriculture in Nigeria: Challenges and Opportunities’’ as theme.

He said that researches had revealed that about 65 per cent of the country’s population were faced with “food insecurity’’.

He called on Nigerians to make agriculture more attractive, saying that the country had a comparative advantage in the sector and should, therefore, not suffer food shortage.

The former president expressed concern that investment in the sector could not address the food insecurity in the country.

“We must all play our cards either in farming, processing, manufacturing, packaging, and we must put in our best to revamp the sector and address food insecurity in our country.’’

He said that some countries that went through the same challenges as Nigeria had all walked out of the problem , but that Nigeria’s was getting worse.

“We must return to agriculture as a means to increase our food production in Nigeria.

“Between 2015 and 2016, there has been no production of grains in the country to feed ourselves, no fertiliser, and there are challenges at all levels of government.

“We have to reflect on how to get back to agriculture and we must get there,’’ he said.

He regretted that many farmers in the country were still using hoe and cutlass.

In his address, Minister of Agriculture, Chief Audu Ogbeh, said the Federal Government under President Muhammadu Buhari was committed to diversifying the nation’s economy through agriculture.

He said that ongoing efforts were expected to largely reduce importation of food items like wheat, rice, fish and sugar.

Ogbeh, who was represented by Alhaji Musibau Azeez, a director in the ministry, said that government was committed to reversing the age-old trend through revitalising agriculture towards innovative re-emergence of its past glory.

Earlier, founder of the NGO, Mr Godwin Ehigiamusoe, said that the importance of attainment of national food security could not be over-emphasised.

He said that the challenges of food insecurity had economic and socio-political implications and that it was one of the critical indicators of national power and influence.

Ehigiamusoe said that a nation which depended on food import “as we do today, remains vulnerable in politics of international economic relations’’.

He said that the various initiatives, including the intervention by the Central Bank of Nigeria (CBN) through rural finance institutions building programme, among others, must be sustained.

“We need the kind of entrepreneurial spirit which swept through the banking sector in the 90s.

“At LAPO, we have over the years made our strong commitment to funding of activities in the rural economy within our institutional mandate of poverty alleviation.

“We have provided N20.7 billion as agricultural loans to micro and small enterprises engaged in livestock, arable and tree crops farming,’’ he said.