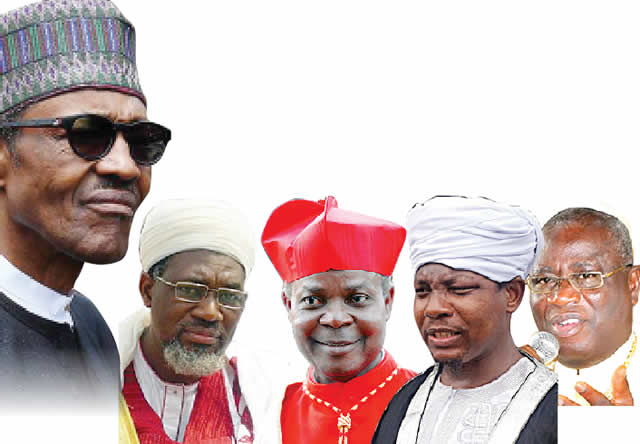 Religious bodies in the country have described the policies of President Muhammadu Buhari-led administration as increasing hunger in the land.

Similarly, leaders of various Christian and Islamic groups in the country took a swipe at the Federal Government, noting that its policies had led to loss of jobs, closure of companies and “massive” hunger in the country.

Speaking to Saturday PUNCH on Friday, the clerics said the economic policies of the government had failed to have positive impact on the lives of Nigerians, calling on President Buhari to review the situation.

For instance, the Christian Association of Nigeria said Nigerians were “truly passing through hunger, hard times and can hardly feed.”

Director of Legal and Public Affairs, CAN, Kwamkur Samuel, said, “You need no angel to tell you there is real hunger in the land. Speak with Nigerians, go to the market, and attempt to travel by road or by air, then you will confirm that things are hard.

“I am not aware of any viable and popular poverty alleviation programme of this government, hence I can’t say whether it is working or not. Government needs to take the bull by the horn and face the challenges facing the nation. Let us stop dwelling on the past and work hard for today and the future with tolerance and respect for each other.”

Also, the leadership of CAN in the 19 northern states and Abuja lamented that Nigerians were suffering and going through pains and hunger under the ruling All Progressives Congress-led Federal Government.

The Northern CAN’s Public Relations Officer, Revd. John Hayab, said the government should embark on policies that show they love the citizens.

“We’re calling on the government to really sit down before pronouncing some policies. We voted for them (people in government) and we don’t want them to fail,” he said.

In a similar vein, the Chairman and Spiritual Father, Cherubim and Seraphim Movement Church Worldwide (Ayo Ni O), Most Revd. Samuel Abidoye, said it was a “curse” that Nigerians were suffering and hungry despite the resources at government’s disposal.

He said, “With the Yuletide around the corner, this is a very dismal situation. What type of Christmas would Nigerians celebrate? How would they face the New Year in this situation? This will be one of the poorest Christmas celebrations in recent time.”

The President of The Muslim Congress, Dr. Luqman Abdur Raheem, said government’s policies had increased hunger in the country, citing division within the President’s party as a reason.

He also said most of the poverty alleviation programmes initiated by the Federal Government were only on the pages of newspapers, with no reality on the ground.

He said, “There is poverty in the land and it’s genuine. People are hungry; they are suffering. Beyond sentiments, the expectations from this government were high, but when they (political office holders) got there, they found out that there was no money due to fall in oil prices and corruption.

“Still, the APC couldn’t manage its success well. There are selfish interests and what we have now is real hunger which is not professionally managed. We agree with Nigerians who say the government’s policies are killing.”

In a similar manner, the Chief Imam, Ansar-Ud-Deen Society of Nigeria, Sheikh AbdulRahman Ahmad, said Buhari should not stop at merely acknowledging the fact that Nigerians were passing through hard times as he did recently, asking the President to act fast to soften the hardship of the citizens.

“Nigerians must continue to get their feelings across to the government in a manner that will not complicate issues, though. We must support the government, but at the same time hold them accountable.”

Likewise, the President of the Muslim Students’ Society of Nigeria, Lagos State Area Unit, Dr. Saheed Ashafa, said the Buhari administration should be blamed for the country’s economic predicament, considering the rate of hunger among Nigerians.

He said, “What we’re expecting from the government is to do things that will pull us out of this economic crisis. We can’t believe that this government is working for us, seeing how the lawmakers recently took delivery of brand new cars.

“The body language of the government is not convincing us that it is doing enough to lift us out of hunger and economic recession. However, as a people, we should be patient and prayerful, but we should not keep quiet. We should keep expressing our views to the government until it gets things right.”

For the Emeritus Archbishop of Lagos, Cardinal Anthony Okogie, the hunger in the land is not just for food, but also for good leadership, peace, security and justice.

The cleric said, “My position has not changed at all and it will not change unless those at the helms of affairs, beginning with the head of state, down to the commissioners, change.

“My fear is that there is a revolution going on underground. Just listen to what the youths are saying. There is hunger in the land and unfortunately, our leaders are not taking care of it. They are busy putting their friends in top places, where they can make money. Some people are still crying for their salaries and not getting them.

“Some people are dying of hunger and we have a head of state and governors; what kind of county is that? The money they are borrowing and the ones they say they have recovered from looters, what are they doing with the money; these are the questions that Nigerians should ask the government.”

The Prelate, Methodist Church Nigeria, Dr. Samuel Uche, asked for God’s intervention in the affairs of the country, saying, “It seems that our leaders are confused.”

Some other clerics in the North, including the Chairman, Christian Association of Nigeria, Katsina State, Very Revd. Nelson Onyeka Chukwu; and the Presiding Bishop of Imitators of Christ Church, formerly Oasis of Love Church, Bauchi, Bishop Nuhu Tende, urged the government to wake up to its responsibility and rescue Nigerians from hunger.

The Bishop of Calabar Diocese, Anglican Communion, Rt. Revd. Tunde Adeleye, who said the President Buhari-led administration is “clueless” on how to handle Nigeria’s economic travails, asked the President to also spend time on developing the economy as he is doing on fighting corruption.

“In the course of pursuing corruption, they have left behind the real care and tender touch for the people. If we say Nigerians are hungry, we are not only declaring the obvious, but speaking the whole truth. We are hungry and because of that, we are also angry,” Adeleye said.

The Bishop of the Ibadan South Diocese of the Anglican Communion, the Rt. Revd. Jacob Ademola Ajetunmobi, wondered why the economy is on the brink of collapse within a year of the APC coming to power.

“The policies are not working. I am not too sure this government is for the masses,” he said.

The Bishop of the Omu-Aran Diocese in Kwara State, Church of Nigeria (Anglican Communion), Rt. Revd. Philip Adeyemo, also said that, like many Nigerians, he would blame the government for the country’s predicament, saying that the policies of the Buhari-led government are “anti-developmental and hurting the masses.”

He said, “I wrote recently that members of the economic team of the Buhari administration do not know what they are doing. They are not helping us. They should be changed immediately.

“The government does not even have poverty alleviation policy. We do not know where it is going. It does not have focus and it is still talking of (coming back in) 2019. It has disappointed Nigerians. They said, ‘Change, change, change.’ Which type of change?”

As for a former Chaplain of Aso Villa Chapel and the General Overseer of the All Christians Fellowship Mission, Abuja, Rev. Dr. William Okoye, he advised the President not to worsen the country’s problems with his introduction of new tax policies.

A retired Anglican bishop of the Akure Diocese, Bolanle Gbonigi, said it was “very” clear that there is abject poverty in the country at the moment.

But the cleric urged Nigerians to support the government even though its economic policies might not be working now.

“I think better days are ahead of this country,” he said.

Also, Bishop, Enugu Anglican Diocese, His Grace, Most Revd. Emmanuel Chukwuma, asked the government to come up with solutions to solve the country’s economic crisis.

The Bishop of the Diocese of Osun North Anglican Communion, Igbaye, Osun State, Most Rev. Abiodun Olaoye, blamed the economic situation partly on the policies of the government, which he said had led to irregular payment of salaries and retrenchment of many workers.

Just like their Christian counterparts, some Muslim clerics have also berated the Buhari-led government for the country’s economic woes.

The Chief Imam of Benin Central Mosque, Alhaji Abdu-Fatai Enabulele, said that the frustrations expressed by Nigerians were justifiable due to the “anti-people” policies of the government.

However, speaking to Saturday PUNCH, the Director of the Muslim Rights Concern, Prof. Ishaq Akintola; the National Missioner of the Alfatih-Quareeb Society of Nigeria, Sheikh Abdurahman; and the National Chief Missioner, AlfathulQareeb Muslim Organisation, Dr. Fadlu-rrahman Tijani, while acknowledging the problem of hunger in the country, called on Nigerians to be patient for the Buhari administration to come up with solutions.

The Amir, Ahmadiyya Muslim Jamaat Nigeria, Mashhud Adenrele Fashola, said though government should have taken steps to reduce hunger in the country, it should not be blamed entirely for the country’s economic woes.

Efforts to get the views of the leaderships of Jama’atu Nasril Islam and Nasrul-Lahi-l-Fatih Society worldwide were unsuccessful.

The Secretary-General, JNI, Abubakar Khalid, neither answered calls made to his mobile telephone line nor responded to text messages sent to the line.

The Publicity Secretary of NASFAT, Alhaji Banji Busari, repeatedly promised to forward the organisation’s view on the issue to one of our correspondents but never did as of the time of filing this report.

Meanwhile, the General Superintendent of Holy Spirit Mission Church, Bishop Charles Ighele, said Nigerians should stop blaming the government because “the citizens of any nation get the government they deserve.”

The leader of the Mark of Overcomers Church, Yenagoa, Bayelsa State, Pastor Elijah Oigboighe, also said even though Nigerians are passing through hardship, they should keep praying, since no situation lasts forever.

Reacting to the statements made by the religious leaders that the policies of the present administration were increasing hunger among Nigerians, the Special Adviser to the President on Media and Publicity, Mr. Femi Adesina, said the President was working hard to lay a new foundation for the nation’s economy.

Adesina, in an interview with our correspondent on Friday, said a new dawn would surely come in Nigeria, but not without hardship.

He said, “President Muhammadu Buhari is working hard to lay a new foundation for the Nigerian economy.

“The new dawn will not arrive without some hardship. But it will surely come.