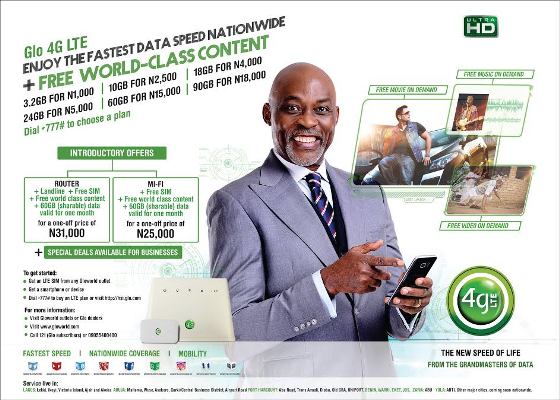 Nigerians have besieged the sales outlets of Globacom in their thousands to take advantage of the nationwide 4G Long Term Evolution (LTE) network which the company launched on Tuesday. Globacom formally launched Nigeria’s largest 4G LTE network at its head office in Victoria Island, Lagos.

The service enables Globacom to offer its subscribers data intensive applications, and will particularly be great news to individuals who consume huge volumes of data, as well as government and corporate organisations like banks, oil and gas companies, academic institutions and health institutions, which rely exclusively on seamless data transfer for their operations.

Information from the company’s GloWorld offices in the cities where the service is live indicates that there has been an upsurge in the footfall at the outlets, principally as a result of subscribers buying the 4G LTE SIMs or seeking information about how to upgrade to the newly launched 4G LTE.

Similarly, many Nigerians have poured encomiums on Globacom for investing massively in the country and making the service available beyond the major commercial cities of Lagos, Port Harcourt and the seat of power, Abuja.

Atitebi Arijedidun, a Lagos business man was among the first set of Nigerians to upgrade to the advanced network. He described the experience as ‘wonderful’.

“I have had a 4G phone for a while now. I was using it with 3G services. I simply purchased a 4G SIM to enable me optimize the capacity of the phone, so to speak. The difference is clear, I tell you. My videos download without any delay. Glo has done very well with this one.

Titus Ojemba, a lawyer based in Port Harcourt described the speed of the service as ‘incredible’. He said he was simply “wowed by the speed and hope Glo can get this service to every nook and cranny of Nigeria soonest.”

Mohammed Aliyu, a secondary school teacher said he loved the flexibility of the offerings. He said he had initially thought the service would be expensive, but was pleasantly surprised that virtually anyone who can afford to buy a smartphone can buy a 4G data bundle.

“There is a package for everyone starting with N50. For example with N500, you can purchase a plan with a whopping 1.6GB of data. It’s a bright idea to include a broad range of bundle options for subscribers,” he said