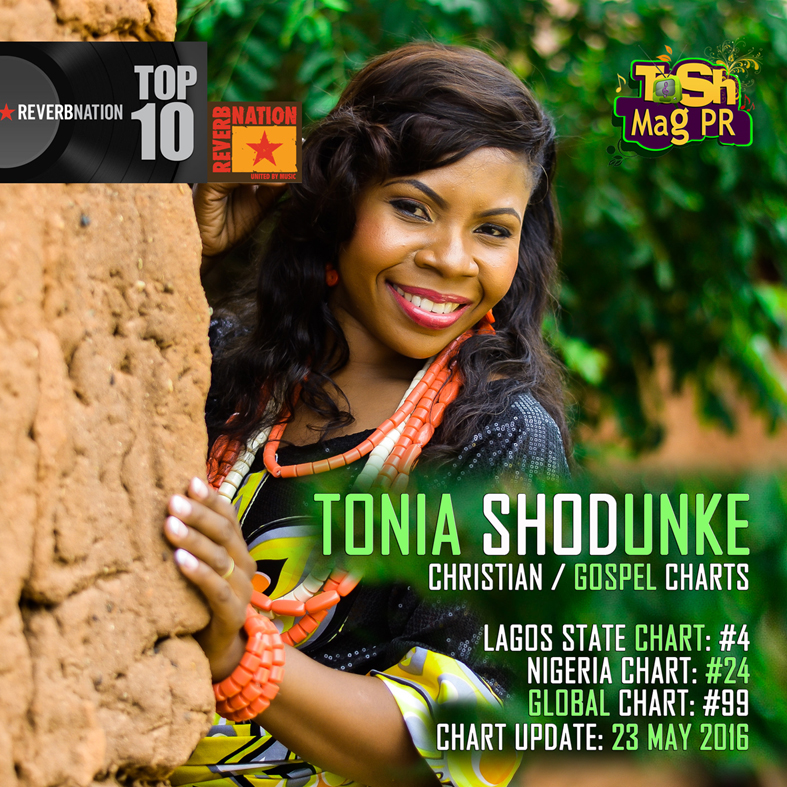 Tonia Shodunke breaks into the Global Top 100 Christian / Gospel Reverbnation Charts at #99 as of Monday 23rd May 2016. Her latest music
video, ‘African Christmas‘ directed by Toba Ogunremi has racked up almost 6000 views on the reverbnation video plays within a week.

Tonia Shodunke is a unique recording contemporary gospel artiste, song writer, praise worship leader, author and a pharmacist. Born as the seventh of eight siblings to the family of Late Mr
T. I. Okoh, Tonia was given birth to in Maiduguri,
Borno State in Nigeria and hails from Ika South LGA
of Delta State.

Her passion for music began at an early age and
brought her to being an integral part of various
choirs including the Victory Voice, Sound of Praise,
The NFCPS choir, RCCG Mass Choir, and Winners’
Voice in Kano and Abeokuta, Ogun State in Nigeria.

Tonia was discovered by Mr Armstrong Ileti when
she accompanied her elder sisters to a choir
rehearsal in the 90’s in Kano and was singing a
song absentmindedly. She was appointed one of
the lead singers afterwards, and the song writing
and composing skills were given birth to.

Anthonia Shodunke, a graduate of Pharmacy from the prestigious Ahmadu Bello University, Zaria in
Kaduna would be known on stage by many as Tonia; a woman of simplicity with a heart panting after God. She is fuelled with her passion to see
people all over the Globe inspired to worship and
praise God.

Tonia received a unique mandate from God on the 23rd of May 2004, which instructed her to start
working towards becoming a ‘sound’ worship
leader, because He intends to use her to raise
others up. In obedience to this call, a group called ‘The Springs of Praise’ was later birthed: a 16-man band of passionate worshipers with a sense of
calling; and panting after the entity of God.

She is married to Pastor Shofela Shodunke and is a proud mother of two wonderful children.