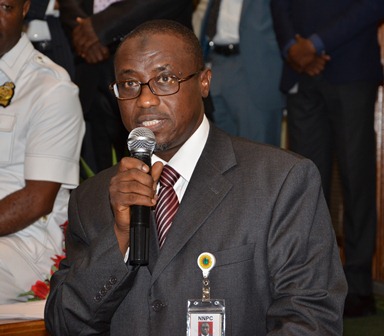 The Group Managing Director of the Nigerian National Petroleum Corporation (NNPC), Dr. Maikanti Baru has said that the agemcy is exploring the possibilities of piping crude oil from Niger Republic for refining in Kaduna.

He made the disclosure to newsmen during a visit to the Kaduna Refining & Petrochemical Company Limited (KRPC) in Kaduna.

Baru said high level contacts have been made with Niger Republic on the possibility of importing crude from the country.

“President Muhammadu Buhari has made several contacts with the President of Niger Republic. We are talking with Niger Ministry of petroleum. We are also talking with the Chinese Company operating in Agadam,” he said.

Baru said some investors have shown interest to build another refinery of 50,000 barrels pay day capacity.

“We are convincing them to come and build side by side with the Kaduna refinery. The intention is to build around Kano but we think there is greater synergy to what I have seen here. I am more convinced they will benefit from some of the utilities of Kaduna refinery,” Baru said.

He said that it was important to explore alternative crude supply to Kaduna Refining and Petrochemical Company, which has been affected by vandalism of pipelines and age.

“Due to challenges with the aged refinery and crude oil pipelines that had been breached severally, the operations of the refinery has been epileptic.

This, we are determined to resolve through various intervention methods including evaluation of alternative crude oil supply from Niger Republic through building of a pipelines of over 1, 000 kilometers from Agadem to Kaduna.

That efforts is being championed by Mr. President himself.

We have already started engagements with the Nigerien Minister of Petroleum and the Chinese that are operating the field at Agadem,” he said.

Baru also pledged to sustain efforts at enhancing energy supply to power industries in Kaduna through the development of Ajaokuta-Abuja-Kaduna-Kano gas pipeline, as well as development of power plants in Kaduna and Abuja.

“These projects will be given special attention during my tenure,” he said.

The GMD disclosed that the College of Ptroleum Resources in Kaduna would start operation on Januarry 1, 2017, and thanked the state government for undertaking to construct internal roads in the school.

He also urged Governor Nasir El-Rufai to sensitise resident against sabotage of the nation’s oil assets due to its adverse effect on the community, environment and national economy.

Responding, El-Rufai said the corporation has assumed a new toga since Baru took over, adding that prompt remittances by the corporation to the Federation Account has remained consistent.

“We are very interested in the NNPC because how well you do affects our lives as states and as a country. This is why many of us are quite gratified you are in charge, and already results are beginning to show as remittances to the Federation Account are higher, state governors are happier than before,” he said.