‘No Controversy Over My US Election Prophecy’ – TB Joshua 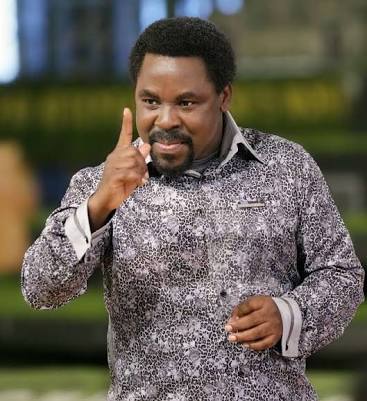 The usual bustle of activities prevailed at the precinct of Synagogue Church of All Nations in Ikotun area of Lagos State, last Sunday. Worshippers, including religious tourists from different parts of the world, were in high spirit, as they made efforts to partake in the day’s service.

It was exactly one week after the church’s General, Prophet Temitope Joshua, had prophesied that the just concluded US presidential election would usher in America’s first female President.

When the results were announced on Monday, Nov 7, Donald Trump was declared winner- a result considered shocking universally. Although, some negative reactions trailed Joshua prophecy, the man of God confidently defended his prophecy saying there was no controversy over his prophecy on the election’s outcome. According to him, the outcome of the election is rather a manifestation of the efficacy of prayers.

He insisted that people who are conversant with the accuracy of his prophecies went into fervent prayers and begged God to reverse the prophecy to favour trump.

Citing biblical reference where prayer altered a prophecy, Joshua likened Trump shock victory to the prophecy of Jonah to the people of Nineveh which said that God would destroy Nineveh within 40 days; but was eventually averted because the inhabitants of the city offered fervent prayers to God.

Joshua then presented many emails which he said he received from some Americans confirming that his prophecy on the election spurred them to intense prayers and which God eventually granted. His words: “Thousands of people that heard my prophecy prayed to God, they fasted and prayed that God should change the prophecy.

That a prophecy is disclosed and it did not come to pass does not mean that it is not authentic.” The author of one of the mails which was read out to the congregation during the service commended Joshua saying: “Your word came and challenged us to pray.

Prophet, God hears your prayer. We prayed and fasted.” Confirming the power of prayer in prophetic utterances, Joshua said, “They know my antecedent that what I say always come to pass.

As a result, they went to God in prayer. This is the power of prayer; it is not a crime to tell you. If you have doubt, look at the track record of the person that is talking. I said that the boat will be rocked, and there will be challenges. What else do you need? Let’s believe in the power of prayer. He added: “We have seen the outcome of the election in America. You will notice that it is all about the popular vote, the vote of the majority of Americans. In this case, we need the spirit of a prophet to recognize or to know a prophet.

Our levels are different. We are not on the same level. We might have great cathedrals, huge bells and all kinds of activities that are good by human standards; but human point of view is limited. 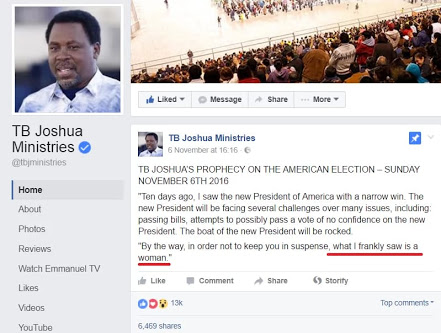