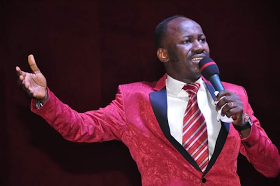 Apostle Johnson Suleman, has barred members of his church from making public comments on his alleged sexual scandals.

In a statement issued by the Directorate of Media, the church warns all members of the church to desist from making public comments in the ongoing sex scandal.

‘It has become imperative that we advise all Omega Children and Christians Worldwide to put an end to the ongoing media war that we have engaged in,’ the church said in the statement seen by PREMIUM TIMES.

‘Every wise person would know that this is not a battle of humans but one between the Kingdom of God and that of darkness.

‘Therefore, nobody is permitted further to issue a statement or comment on the matter. All Facebook Live Videos on the issue should also stop forthwith. It is advised that we spend our time concentrating on more relevant issues that bothers on the Kingdom.

‘We are well aware were all these are coming from and we will deal with it spiritually,’ the statement read.

The statement came just as a second lady, who identified herself as Queen Esther, came forward on Sunday to speak about an alleged sexual relationship with Apostle Suleman.