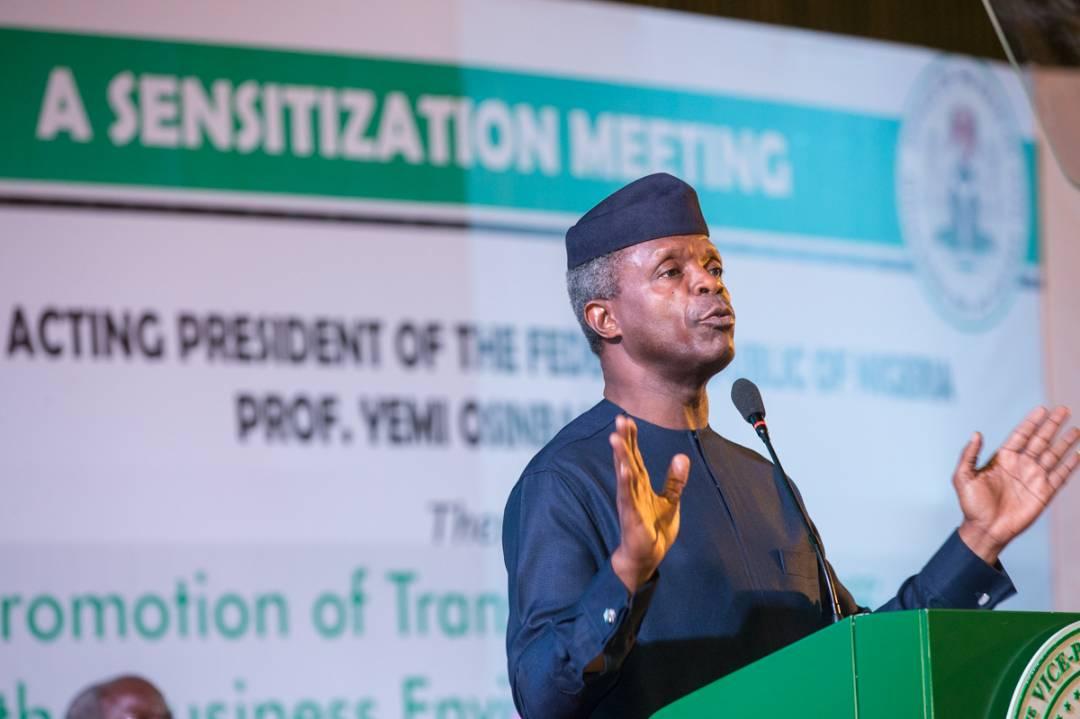 The coalition of Northern youth groups who had earlier in the month called for Igbos to vacate the region on or before the 1st of October have written to the Acting PresidentYemi Osinbajo to allow the Igbos “actualize their dream” of the sovereign nation of Biafra.

The letter has stated that the coalition feels “it is risky” for the North to go on “pretending like it is safe” to cohabitate with the Igbos in Nigeria.

Read the letter below:

Though we do not doubt Your Excellency’s bona fide concerns for the peaceful resolution of the crises, we nevertheless have reservations as to the efficacy of this approach in ensuring lasting solutions.

Our doubts are informed by the following historical antecedents that have characterized the behavior and conduct of the Igbo in Nigeria and previous efforts at containing them.

The Igbo of Eastern Nigeria manifested their hatred for Nigeria’s unity barely five years after we gained our independence from the British when on January 15, 1966, their army officers carried out the first-ever mutiny that marked the beginning of a series of crisis which has profoundly altered the course of Nigeria’s history.

By that ill motivated cowardly and deliberate action, the Igbo killed many northern officers from the rank of lieutenant colonel upwards and also decapitated the Prime Minister and the political leadership of the Northern and Western regions but left the zenith of Igbo leadership at the Federal level and the Eastern region intact. “In line with the Igbo plan, General Aguiyi-Ironsi took advantage of the vacuum and, instead of returning power to the remnants of the First Republic government, he appropriated the coup and attempted to consolidate it for his people.

Army officers of the Northern Region were eventually compelled to execute a counter coup on July 29, 1966 following a coordinated series of brazen provocations from the Igbo who taunting northerners on northern streets by mocking the way leaders of the region were slain by the Igbo. This unfortunately resulted in mob action which resulted in the death of many Igbos.

And when Lt. Col. Yakubu Gowon, from the North took over as Head of State following the counter coup, the Igbo through Lt. Col. Ojukwu, characteristically refused to recognize Gowon.

Ojukwu declared the secession of the Igbo people from Nigeria and the formation of the republic of Biafra on May 30, 1967 resulting in a civil war that led to the tragic deaths of more than 2 million Nigerians.

Concerned by the fact that the Biafrans have confessed to arming themselves for a violent breakup, we feel that it is risky for the rest of the country particularly the North to go on pretending that it is safe for us to co habitate with the Igbos given how deeply they are entrenched in our societies .

And since evidently the Igbo have not been sufficiently humbled by their self imposed bloody civil violence of 1966, we are strongly concerned that nothing short of granting their Biafran dream will suffice.

And since the Igbo have virtually infiltrated every nook and cranny of Northern Nigeria where they have been received with open arms as fellow compatriots, we strongly believe that the region is no longer safe and secure in the light of the unfolding threats and the fact that for a long time, the Igbo have gone to extra ordinary lengths to ensure that in their domain in the South East, Northerners and Westerners are as much as possible disenfranchised from owning any businesses whereas in Kano alone, they own not less than 100, 000 shops across all the business districts.

That since the younger generation of Nigerians makes up for more than 60 per cent of the nation’s population, it is our hope that they inherit this country in better shape so that they can build a much better future for themselves and their offsprings in an atmosphere that is devoid of anarchy, hate, suspicion and negativity that characterize the polarized, and clearly irreconcilable differences forced on us by the Biafran Igbos.

As the Igbo agitations persist and assume threatening dimensions, we submit that there is need to ensure that they are given the opportunity to exercise the right to self-determination as entrenched under the aforementioned international statutes to which Nigeria is a signatory.

Aware that the right of self-determination in international law is the legal right for a “people” that allows them to attain a certain degree of autonomy from a sovereign state through a legitimate political process, we strongly demand for a referendum to take place in a politically sane atmosphere where all parties will have a democratic voice over their future and the future of the nation.

The Igbo from all over the country and in the Diaspora should be advised to converge in their region in the South-East for a plesbisite to be organized and conducted by the United Nations and other regional bodies for them to categorically to decide between remaining part of Nigeria or having their separate country.

That government should at the end of the plesbite implement whatever is agreed and resolved in order to finally put this matter to rest.

Lastly, we pray His Excellency to study the references forwarded with this letter dispassionately and decide who is more in the wrong between those who openly pledge allegiance to a country other than Nigeria backing it up with persistent threats of war and those of us whose allegiance remains with the Nigerian state but simply urge that the secessionists be allowed to actualize their dream peacefully throw universally entrenched democratic options.