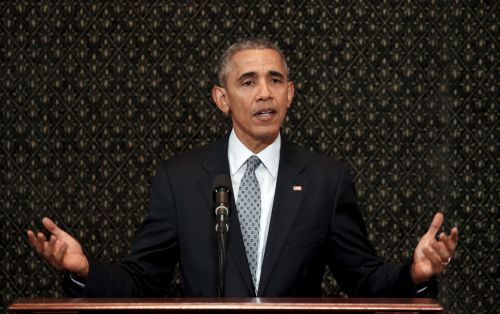 President Barack Obama has responded to
arguments that push-back against the White
House administration is what is behind the rise
of Donald Trump, the controversial Republican
presidential candidate who is leading in the
delegates race.

“I have been blamed by Republicans for a lot of
things … but being blamed for their primaries
and who they’re selecting for their party is
novel,” Obama told CBS News at the White House Rose Garden on Thursday.

“What you’re seeing within the Republican
Party, is to some degree, all of those efforts
over a course of time creating an environment
where somebody like a Donald Trump can
thrive,” he added.

Trump, a billionaire businessman with no
previous political experience, has taken the
GOP race by storm and is leading in the
delegates count, but has been strongly
criticized by his rivals and the political
establishment of divisive speech, such as calling on a ban on all Muslims coming to
America.

Some Republicans, such as former Louisiana
Gov. Bobby Jindal, have suggested that the
popularity of Trump was born out of pushback
against Obama.

In an article for the Wall Street Journal last week, Jindal, who dropped out of the
Republican race last year, noted that
throughout American history, the characters of
newly elected presidents have often stood in
sharp contrast to those of their predecessors.

“After seven years of the cool, weak and
endlessly nuanced ‘no drama Obama,’ voters
are looking for a strong leader who speaks in
short, declarative sentences. Middle-class
incomes are stagnant, and radical Islam is on
the march across the Middle East. No wonder voters are responding to someone who
promises to make America great again,” Jindal
wrote.

In his speech on Thursday Obama insisted,
however, that one of his main goals has always
been to unite the American people.

“What I’m not going to do is to validate some
notion that the Republican crackup that’s been
taking place is a consequence of actions that
I’ve taken,” the president declared, calling on
Republicans to “do some introspection” and
figure out what has allowed “the circus that we’ve been seeing to transpire.”

On the Democratic side, Obama again refused to
endorse either of the two main candidates for
the presidential nomination, Hillary Clinton and
Bernie Sanders.

“My most important role will be to make sure
when primaries are done I’m bringing
everyone together so we can focus on winning
the general election,” he added.

While Trump has stirred a number of different
controversies in his speeches, one of the main
focuses of Thursday’s CNN debate in Miami
centered on his stance on Islam. Trump
defended his suggestions that Islam is a
religion that stokes hatred, and claimed that “virtually 100 percent” of mosques are radical.

Florida Sen. Marco Rubio, one of his presidential
rivals, argued that such rhetoric endangers the
safety of others, pointing to Christian
missionaries in Bangladesh that he met who
told him that their work environment is hostile
precisely because of American politicians’ comments that are critical of Islam.

“Their safety and security very much relies
upon friendly Muslims that live alongside them,
that may not convert, but protect them and
certainly look out for them. And their mission
field really are Muslims that are looking to
convert to Christianity as well,” Rubio said.

“And they tell me that today they have a very
hostile environment in which to operate in
because the news is coming out that in
America, leading political figures are saying
that America doesn’t like Muslims. So this is a
real impact.