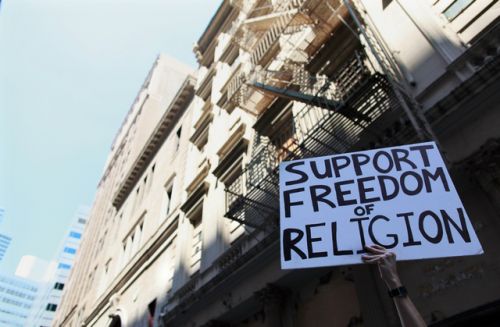 The Obama administration has agreed to
change the phrasing in citizenship study
materials to accurately reflect the constitutional
right of “freedom of religion” so that new
citizens don’t think that liberty is restrained to
just “freedom of worship.”

The Department of Homeland Security’s Office
of Citizenship and Immigration Services notified
Sen. James Lankford, R-Okla., last week that his
request to have the wording on a
naturalization study guide to be changed from
“freedom of worship” to “freedom of religion” will be granted.

Lankford, the co-chair of the Congressional
Prayer Caucus and a former Baptist youth
ministry leader, sent a letter to Sec. of Homeland Security Jeh Johnson last June inquiring about
the use of the term “freedom of worship” in
question 51 of a naturalization study guide
called “Learn About the United States: Quick
Civic Lessons.”

The question asks: “What are two rights of
everyone living in the United States?”

Although the department originally responded
to Lankford’s letter a few weeks later and
explained that there were no immediate plans
to make changes to the study guide,
Citizenship and Immigration Services Director
León Rodriguez sent a letter to Lankford on March 28 that stated the department will
actually proceed with Lankford’s suggested
change.

“Upon further consideration, however, we
have determined that making this change is
feasible because it is a change in terminology
rather than an addition or deletion of test
content,” the letter reads. “We are in the
process of revising our test study materials and Web content to reflect the change.

The letter explained that the agency will revise
about 40 different “internal and external Web-
based and printed publications.”

“I applaud the Department of Homeland
Security for listening to me and deciding to
change their material to reflect our First
Amendment right of freedom of religion,”
Lankford said in a statement shared with The
Christian Post. “At first glance, it appears like a small matter, but it is actually an important
distinction for the Constitution and the First
Amendment.”

Lankford, who sits on the Homeland Security
and Governmental Affairs Committee,
continued by explaining why the recognition
of “freedom of religion,” rather than “freedom
of worship,” is so important.

“The ‘freedom of religion’ language reflects our
right to live a life of faith at all times, while the
‘freedom of worship’ reflects a right simply
confined to a space and location,” he stated.
“We live in a great nation that allows
individuals to live out their faith, or have no faith at all. To protect freedom and diversity, we
must carefully express this right throughout
the federal government.”

Lankford told The Daily Signal Thursday that the new tests will help immigrants “get off on
the right foot,” so that each new new U.S.
citizen will know what their rights are and
“have the ability to live their faith.”

Rodriguez’s letter added that Citizenship and
Immigration Services officers will now be
accepting “freedom of religion” and “freedom
of worship” as correct answers on
naturalization tests.