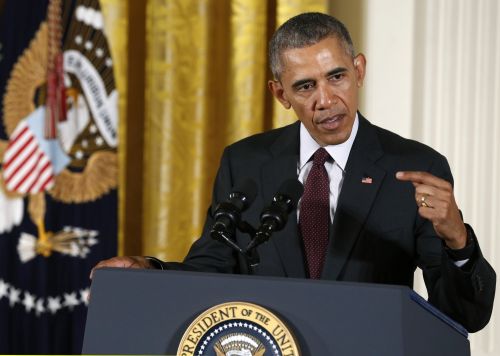 President Barack Obama said that his
understanding of the Bible and his Christian
beliefs led him to issue the directive at public
schools calling on students to be allowed to
use the bathroom of their choosing regardless
of their biological sex.

“My reading of scripture tells me that that [the]
Golden Rule is pretty high up there in terms of
my Christian belief,” he said during a town hall
in Elkhart, Indiana, according to Breitbart News on Thursday.

When asked why he decided to make such a
big issue out of school bathrooms, Obama
explained that his concern stems from the
bullying that transgender students experience.

“What happened and what continues to
happen is you have transgender kids in
schools and they get bullied and they get
ostracized and it’s tough for them,” the
president explained.

Obama said that he understands not all people
agree with him, and added:

“I have profound respect for everybody’s
religious beliefs on this, but if you’re at a public
school, the question is, how do we just make
sure that, children are treated with kindness.”

The directive issued earlier in May states that
students should be free to use the bathroom of
their choosing should a parent or guardian call
and notify his or her school district that the
student’s identity “differs from previous
representations or records.”

“There is no room in our schools for
discrimination of any kind, including
discrimination against transgender students on
the basis of their sex,” U.S. Attorney General
Loretta Lynch said in a statement at the time.

Eleven American states filed a lawsuit against the Obama administration at the end of May
over the directive, however, arguing that the
guidance has “no basis in law.”

A joint statement from the states of Alabama,
Arizona, Georgia, Louisiana, Maine, Oklahoma,
Tennessee, Texas, Utah, West Virginia and
Wisconsin further stated that such a directive
would turn educational settings across the U.S.
“into laboratories for a massive social experiment, flouting the democratic process,
and running roughshod over common-sense
policies protecting children and basic privacy
rights.”

Jeff Landry, the attorney general for Louisiana,
vowed that he would “not allow Washington to
wreak further havoc on our schools,” while
Texas Gov. Greg Abbott stated that Obama is
“not a king.”

Patrick Morrisey, attorney general for West
Virginia, said that the bathroom guidance
would “force a seismic shift in local schools,”
and Joy Hofmeister, the state education chief in
Oklahoma, warned that the guidance could
pose a threat to the federal funding for schools who refuse to comply, calling the president’s
move “disturbing.”

The joint state lawsuit will be aimed at blocking
the federal government from “implementing,
applying or enforcing the new rules,
regulations and guidance interpretations,” The
New York Times reports