Oprah Endorses Hillary Clinton on TD Jakes’ Show: ‘You Don’t Have to Like Her’ to Vote for Her 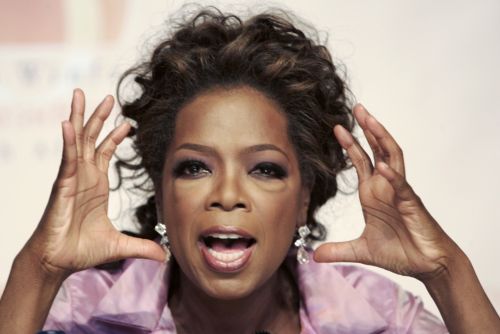 Media mogul Oprah Winfrey didn’t bite her tongue when she was asked to comment on the 2016 presidential election on T.D. Jakes’ show  on Thursday. Being a lifelong Democrat, Oprah affirmed her support for Hillary Clinton and encouraged other Americans to vote for the Democratic presidential nominee if they “like this country.”

“The reason why I haven’t been vocal other than saying, ‘I’m with her,’ is because I didn’t know what to say that could actually pierce through all the noise and the chaos and the disgusting vitriol that’s going on, and actually be heard.”

The Oscar nominee told the audience that the decision between the two major candidates should be clear. “But there really is no choice, people. All the people sitting around talking about they can’t decide, this is what I want to say. All the people, I hear this all the time, you get into conversations — and there’s not a person in this room who hasn’t been in the same conversation — where people say, ‘I just don’t know if I like her.'”

To these people, Oprah quipped, “she’s not coming over your house!”

Jakes chimed in, adding, “It’s scary at a time when leadership is so critical in our country.”

Winfrey, who once owned a talk show and now owns the TV network OWN, has an estimated net worth of $3 billion. Her broad platform has tremendous influence, but some evangelicals have warned believers about Winfrey’s Christian worldview.

As previously reported by The Christian Post, some leading evangelicals have cautioned Christians against Winfrey’s beliefs. Christian apologists Josh McDowell and Dave Sterrett wrote the book “O” God: A Dialogue on Truth and Oprah’s Spirituality.

In the book, they claim that Winfrey believes in pantheism — God is all and all is God — and that there are mutliple paths to reach God. They also say Winfrey advocates for pursuing one’s inner desires rather than demonstrating restraint if the act is considered a sin in the Bible.

The apologists also note that Winfrey mixes beliefs to create “a hodgepodge of personalized faith.”