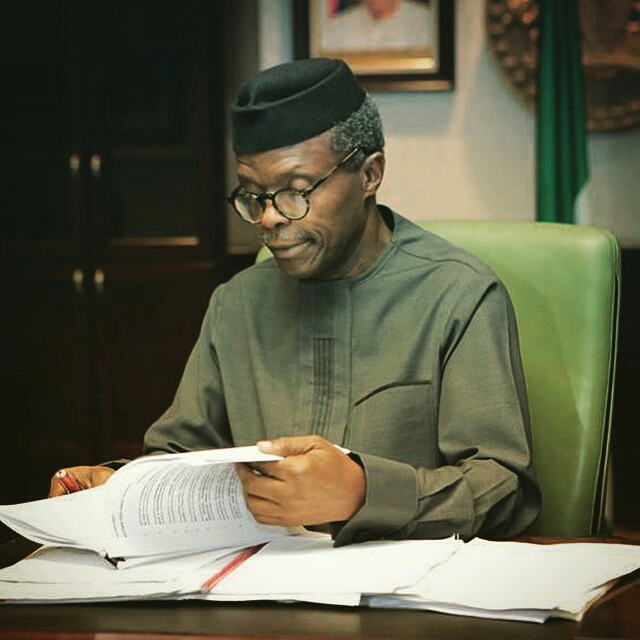 The Acting President, Yemi Osinbajo , on Tuesday, signed into law two bills that have earlier been passed by the National Assembly.

According to a statement by the Senior Special Assistant to the Acting President on Media and Publicity, Mr. Laolu Akande, the bills signed into law will ultimately facilitate access to more affordable credit for Nigerians.

The signed bills are the Secured Transactions in Movable Assets Act , 2017 (otherwise known as Collateral Registry Act) and the Credit Reporting Act, 2017.

According to the statement, ‘The Collateral Registry Act ’ ensures that Micro, Small and Medium Enterprises in Nigeria can register their movable assets such as motor vehicles, equipment and accounts receivable in the National Collateral Registry, and use same as collateral for accessing loans.

“ This, in turn, will increase their chances at accessing financing and tackle one of the major obstacles faced by MSMEs, ” Akande said.

The Credit Reporting Act provides for credit information sharing between Credit Bureaus and lenders (such as banks), as well as other institutions that provide services on credit such as telecommunication companies and retailers.

A Credit Bureau is defined as a company that collects information relating to the credit ratings of individuals and makes it available to financial institutions, who need such information to determine an individual’s credit- worthiness and whether or not to grant loan applications to such individuals.

The statement read, “ Access to credit is critical to economic growth and is considered to be the motor for driving private sector development.

“However, in Nigeria more than 70% of private enterprises, typically MSMEs, have limited or no access to credit. Credit applications get rejected due to insufficient credit history and information for the lender to use to make a reasonable judgement , as well as unacceptable collateral.

“The two new Acts remove those obstacles for MSMEs.

“Traditionally, banks only give loans to businesses that can provide fixed land and property as collateral. This shuts out MSMEs which usually own only movable assets like motor vehicles and equipment.

“The Collateral Registry Bill , 2017 , will give confidence to lenders to utilise the Registry and thereby make credit available to MSMEs and individuals through the use of their movable assets as collateral.

“The Credit Reporting Act now enables lenders to make reasonable judgement on whether or not to extend credit to an individual , and reduces the cases of bad loans. ”

On February 21, the leadership of the National Assembly was reported to have publicly committed to passing the two bills as part of the 60- Day National Action Plan for Ease of Doing Business initiated by the Presidential Enabling Business Environment Council.

That promise was kept by the National Assembly last week with the Bills forwarded to the Acting President for assent.

With the passage of these Acts, the existing Central Bank of Nigeria Guidelines regulating the operations of the National Collateral Registry and Credit Bureaux have now been replaced by formal legal frameworks.

The passage of these Acts would facilitate the achievement of the goals of the Presidential Enabling Business Environment Council set up by President Muhammadu Buhari in July 2016 and chaired by the Vice – President to progressively make Nigeria an easier place for businesses to start and thrive.