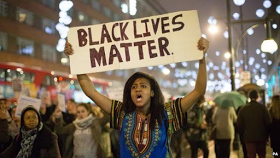 An online petition to U.S President Barack Obama
to categorise ‘Black Lives Matter’ campaign and
movement as a terrorist organization has gathered
over 100,000 signatures.

This comes in the wake of 5 Police officers being
killed as retaliation after two Black men Alton Sterling and Philando Castille were shot to death
by Police officers last week even when they posed
no threats or committed no crimes.

The petition, hosted on the
whitehouse.gov website, was created one day
before the attack on police in Dallas, but has
picked up steam in its wake.
Read what the petition states:

‘Terrorism is defined as “the use of violence
and intimidation in pursuit of political aims”.
This definition is the same definition used to
declare ISIS and other groups, as terrorist
organizations. Black Lives Matter has
earned this title due to its actions in Ferguson, Baltimore, and even at a Bernie
Sanders rally, as well as all over the United
States and Canada. It is time for the
pentagon to be consistent in its actions –
and just as they rightfully declared ISIS a
terror group, they must declare Black Lives Matter a terror group – on the grounds of
principle, integrity, morality, and safety.”

Petitions on the White House website need to
reach 100,000 signatures in order to receive an
official response. Consequently, at time of writing,
over 100,000 signatures have been made.
Department of Homeland Security (DHS) Secretary
Jeh Johnson declined to define the massacre of 5 white police officers by a Black man as a hate
crime, and said that it is not reflective of
movements like Black Lives Matter.

“At a time like this when tensions are high,
in the wake of events in Dallas and Baton
Rouge and Minnesota and elsewhere, it’s
important to remember that just as the
shooter on Thursday night is not reflective of the broader movement to bring about
change in police practices that any police
officer who engages in excessive force is
not representative of the larger law
enforcement community, which with
increasing frequency, reflects the community at large,” Johnson said Sunday on NBC’s “Meet the Press.”