Pastor Adeboye Steps Down, Oyedepo, Olukoya, Kumuyi, Others To Follow 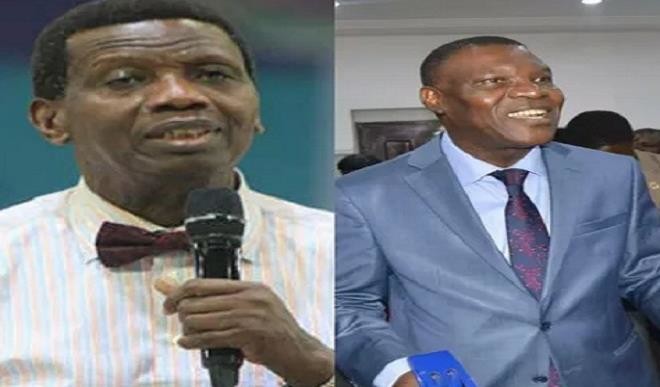 Adeboye steps down, Oyedepo, Olukoya, Kumuyi, others to follow

It was a mixture of surprise and anxiety on Saturday for ministers in the Redeemed Christian Church of God when the respected cleric and General Overseer of the church, Pastor Enoch Adeboye, announced a new leader for the church arm in Nigeria.

Adeboye made the declaration at the church’s Annual Ministers Thanksgiving held at the Redemption Camp in Ogun State.

SUNDAY PUNCH gathered that Adeboye started his speech at the service by telling the stunned ministers that he initiated a pension scheme for the church’s retired full-time pastors that would enable them earn 100 per cent of their salaries as pension.

He reportedly said that government had been meddling with the affairs of churches in Nigeria and he had to discontinue with the scheme when the government introduced a contributory pension scheme which the church later joined.

Ministers present at the gathering told one of our correspondents that Adeboye said the government also interfered in the administration of the church by stipulating mandatory office tenure for general overseers of all registered churches in the country through a regulation.

He noted that this regulation also extended to clergymen like Bishop David Oyedepo of the Living Faith Church Worldwide International aka Winners Chapel, Pastor W.F. Kumuyi of the Deeper Christian Life Ministry and Bishop Mike Okonkwo of The Redeemed Evangelical Mission, among others.

It was gathered that the Financial Regulations Council had stipulated a maximum period of 20 years for the heads of all registered churches, mosques, and civil society organisations.

The FRC established by the Financial Reporting Council of Nigeria Act, No. 6, 2011, under the supervision of the Federal Ministry of Industry, Trade and Investment, is responsible for, among other things, developing and publishing accounting and financial reporting standards to be observed in the preparation of financial statements of public entities in Nigeria; and for related matters.

Governance Code 2016 of the Act encompasses three sectors: the private, the public and not-for-profit. It is the not-for-profit sector, sometimes referred to as the Benevolent Sector, the Third Sector or the Civil Society Sector, that religious bodies fall under.

“Where, for any reason, a founder or leader of NFPO also occupies any of the three governance positions of chairmanship of the board of trustees, the governing board or council, and the headship of the executive management (or their governance equivalents), the following provisions shall apply before the end of the organisation’s financial year in which this code takes effect.

“The founder or leader shall cease to occupy these three governance positions simultaneously. This is to ensure the separation of powers and avoid possible concentration of powers in one individual.

“The founder or leader may however choose – subject to the agreement of the organisation’s apex authority as expressed in the annual general assembly, annual meeting, annual stakeholder engagement, annual conference, annual synod, annual fellowship assembly or their equivalents – only one of these three governance positions subject to his current tenure. This is to ensure a clear division of responsibilities at the head of the organisation between the running of the governing body and the executive responsibility for the management and fulfilment of the organisation’s mission.

“Where the founder or leader has occupied all or any of these three governance positions for more than twenty years, or is aged seventy years or above, the choice in the section above should only relate to the board of trustees as in section below, except the constitution of the organisation otherwise provides.’’

SUNDAY PUNCH learnt that apart from Adeboye, the law would cause leadership changes in other churches, where their general overseers had spent more than 20 years in that capacity.

When contacted by one of our correspondents, the Public Relations Officer of the Deeper Christian Life Ministry, Mr. Segun Babatope, declined to speak on whether Pastor Kumuyi would also step down like Pastor Adeboye did.

He referred our correspondent to the church secretary, who also declined to speak on the matter.

Babatope said, “I cannot speak on behalf of the church. We are not fully aware of what Pastor Adeboye said and we cannot comment on rumours.”

Also, calls made to the mobile of Rev. Chris Okotie were not answered. He did not also reply the text message sent to his mobile as of press time.

Similarly, when contacted on Saturday, one of Pastor Olukoya’s media aides, Mr. Idowu Ajanaku, did not respond to calls made to his mobile phone, neither did he respond to the text message our correspondent sent to him.

A Senior Advocate of Nigeria, Mr. Dele Adesina, who is an ally of Bishop David Oyedepo, told SUNDAY PUNCH that he needed to read the FRC’s code to give “an informed opinion” on the issue.

How the ministers’ meeting ended

Sources said after his speech at the meeting, Adeboye introduced Pastor Joseph Obayemi as the ‘new overseer’ of the church, Funsho Odesola as the new church secretary and Joseph Adeyokunu as the new church treasurer.

Adeboye reportedly said, ‘‘At least, nobody can stop me from being a general overseer in other countries of the world.’’

By the pronouncement, Adeboye ceases to be the General Overseer of the RCCG in Nigeria while he remains the church’s spiritual leader worldwide and general overseer of its international arm. The church has branches in about 190 countries.

SUNDAY PUNCH learnt that the clerics, who were newly appointed into key positions in the church, were not allowed to speak to the gathering. But Adeboye asked the ministers to pray for them and he also did the same.

A statement reportedly issued by Odesola after the meeting stressed that the new structure was particular to Nigeria alone as Adeboye remained the spiritual leader and global missioner of the church.

Before now, there had been expectations in the church that Adeboye would name a successor after he clocked 70 — the stipulated retirement age by the church.

In a statement credited to Leke Adeboye, Adeboye’s last son and personal assistant, he cited the FRC’s law as the reason for the church’s decision, adding, however, that Adeboye remained the General Overseer of RCCG worldwide.

Adeboye is now 74. He became the church’s general overseer in 1981 after taking over from the church’s founder, Pa Josiah Akindayomi.

Our correspondent gathered that at the service, Adeboye asked the ministers to tell all members in their parishes to join any political party of their choice.

The revered cleric noted that by joining political parties, they would be able to partake in the making of vital political decisions at the ward level in order for the country to have good representation.

He also noted that their involvement in politics would check imposition of candidates.

Speaking with one of our correspondents, a human rights activist and lawyer, Ebun-Olu Adegboruwa, who commented on the FRC law, said churches, mosques and other not-for-profit organisations, as long as they are registered with the Corporate Affairs Commission, were bound by the new financial regulation targeted at ensuring financial transparency and seamless succession.

Adegboruwa who is also an RCCG pastor, said, “The plan of succession must not be to the benefit of a family member. By law, churches are called incorporated churches with a board of trustees. It cannot be run by a family. Pastor Adeboye, of his volition, decided to obey the regulation by handing over to a successor. I must also state that the confusion being created by some people that Pastor Adeboye is the general overseer of the RCCG Worldwide is unnecessary. There is no such organisation as the Redeemed Christian Church of God Worldwide. He is the Global Missioner and Spiritual Leader of the Church. There is nothing like RCCG Worldwide.’’

There were reports on Saturday that the Federal Government had suspended the not-for-profit governance code of 2016. The human rights activist and lawyer explained that the law was suspended in relation to the public sector and not for organisations like churches and mosques.

He said, “There was a stakeholders’ meeting where churches, mosques and civil society organisations met with the government. We actually challenged the regulation at the Federal High Court and we lost. We decided to comply with the regulation because we didn’t want the government to see Christians as people who do not want to follow a seamless succession system. We also do not want government to see us as people who have something to hide about their finances. The RCCG is a transparent organisation and that’s why it decided to comply.

“This (regulation) is not just about Pastor Adeboye. It concerns all the churches registered in Nigeria. Any church leader who has spent 20 years has to hand over to somebody else.”

Another legal practitioner, Moses Alao, told SUNDAY PUNCH that the FRC regulation provides that a religious leader of a registered religious organisation should step down after 20 years in office or on attainment of age 70.

He said, “Whichever comes first, it is either the religious leader has turned 70 or has spent 20 years or more as the head of the organisation, he has to go. The person will stop being involved in administrative issues of the religious organisation. He will only be a figure head with no real authority. Pastor Adeboye, in the case of the Redeemed Christian Church of God, will still be the spiritual figure head but there will be a general overseer (a position he had relinquished).’’