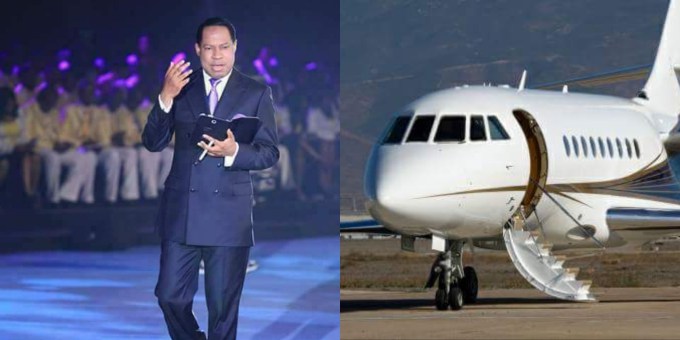 The Jet Aircraft gift was given by the Loveworld Music and Art group, an arm of the Believers Loveworld Ministry (aka Christ Embassy) trained by the Man of God to produce world class, worded and faith-filled gospel tunes as well as highly skilled and energetic kingdom dancers. These folks are not mere singers and entertainers but they are spirit filled gospel music ministers.
Believers Loveworld under the leadership and tutelage of Pastor Chris has produced an uncountable number of talented worshippers all around the world; such as the ” I Know Who I Am” crooner, Sinach, Evang Kathy Woghiren, Buchi, Frank Edward, Joseph Omo Ebhodaghe (Joe Praise), Eben, Ada Ehi Moses, Martin Phyke, Peter Tobe, Viwe Nikita, Samsong, Da Flame, Pee Yu. Obi Shine, Victor Ike, Sophia, Chris Shalom, T-Sharp, Sharon CSO, Deacon Raph, Isaiah, Eli J, Iyke Onka, Destine Destined Destiny and a whole lot more.

They are made successful by following the words of the Man of God Pastor Chris.

This apparently is happening at a time when some some set of people are crying over ten percent tithe and offering.
Unfortunately for the folks, they have been left behind groping in the dark. Their wisdom has failed them because it will always come to naught. The more we sow into the anointing, the bigger we become and the more they complain and profane against the anointing, the smaller and worse they become.
Only through knowledge shall the just be delivered into their inheritances.

Bravo to our Loveworld Music Stars!

You Are Made And Exalted Forever!!

Much Love From All Of Us!!!