Pastor Saeed Abedini Files for Divorce From Wife Naghmeh, Says ‘Only Path Toward Healing Is Apart’ 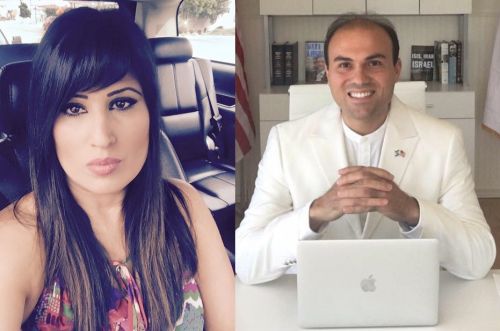 After lobbying for years to be reunited with her husband imprisoned for his Christian faith in Iran, Naghmeh Abedini, the estranged wife of Pastor Saeed Abedini, revealed on Tuesday that her husband, who was released from prison earlier this year, has filed for divorce and he believes it is the “only path toward healing.”

“It is with a heavy and broken heart that I inform all of you who have prayed and wept with our family the last few years, that Saeed has rejected counseling for anger and abuse and has filed for a divorce. There will be a time to share more fully, but for now, we appreciate your prayers,” Nagmeh announced to her nearly 85,000 followers on Facebook Tuesday evening.

In a separate announcement Wednesday evening, Pastor Abedini confirmed the divorce action noting that he was “deeply saddened” but believes the “only path toward healing is apart.”

“My heart is deeply saddened to be sharing the news that Naghmeh and I will be divorcing. She has been my wife of 12 years and she will always be the wonderful mother to our amazing children. While we have experienced struggles, she, along with my children will forever be my heroes, both for what they had to deal with during my imprisonment in Iran and for how they never gave up fighting for my freedom,” he said.

“There are no words to describe the ongoing effect of the trauma I experienced and my family has experienced both during and in the aftermath of my imprisonment. We are different people, and we are hurting people. It pains me to say, but I have decided the only path toward healing is apart, and not together,” he continued.

The Abedinis, who have two young children, have been in the public eye since he was placed under house arrest and later imprisoned for three-and-a-half years in his native Iran in 2012 forparticipating in Christian home churches.

While imprisoned, Pastor Abedini’s wife made many public appearances lobbying for his freedom including giving a speech to the United Nations Human Rights Council in 2013. She also met privately with President Obama when he visited the couple’s current hometown in Boise, Idaho, in 2015.

In November that year, just two months before Pastor Abedini was released from imprisonment in Iran, Naghmeh shocked her supporters when she announced that she was suspending her public advocacy for her husband, citing continued psychological and sexual abuse in her marriage among other reasons.

On the same day that Pastor Abedini returned home to Boise this year, however, online court records cited by the Idaho Statesman said Naghmeh filed a domestic relations case in Ada County against her husband as well as a petition for legal separation.

She sought a temporary restraining order concerning the couple’s two children and property owned by them.

“I love my husband, but as some might understand, there are times when love must stop enabling something that has become a growing cancer. We cannot go on the way it has been. I hope and pray our marriage can be healed,” she later told her followers on Facebook.

The Idaho Statesman also reported that Pastor Abedini pleaded guilty to domestic battery following a July 2007 incident at the couple’s West Boise home and was sentenced to 90 days in jail, which was suspended.
An incident report reveals that Pastor Abedini got into an argument with his wife and shoved her several times during the incident.

The pastor, who was 27 at the time, was speaking with family members via his laptop computer and Naghmeh, then 30, got upset at something he told them and tried to close the computer.

Naghmeh — who was holding her daughter, Rebekka, then 10 months old — told police, according to the Statesman, that her husband “pushed her several times” and forced her out of the room.

“He told me that he told her to get out of the room and made hand gestures indicating that he pushed her,” Officer Erik Tiner wrote. “I asked him if he pushed her and he denied doing so.”

Naghmeh told police that her husband threatened to beat her up if she did not leave the room. She also claimed that she had previously been the victim of domestic violence when the couple lived in Iran.

Earlier this year, according to the Statesman, Pastor Abedini was arrested on three misdemeanor counts of violation of a restraining order. Those Ada County cases are still going through the court system.

“Sometimes as Christians, we experience pain for which there is no explanation in this life, yet we must continue, even in the hardest of times, to look to Christ for strength, grace and comfort. I am trying to do that now, and I know Naghmeh is doing the same. Even in our disappointments, when we don’t have all the answers, Christ is still Lord. He is good now and forever,” Pastor Abedini said on Facebook on the decision to divorce his wife Wednesday.

He also noted that he will to continue his work around the world on behalf of persecuted Christians in Iran and others who have been subjected to the humanitarian abuses committed by that country’s despotic regime.
Naghmeh Abedini at the UN Human Rights Council in Geneva
“My personal pain, and our family’s struggle, does not diminish my commitment to Christ or my resolve to preach his Gospel to Iranians and to Muslims around the world. It also doesn’t (sic) effect my resolve to stand up to the Iranian government whose human rights abuses are among the worst in the world,” he added.