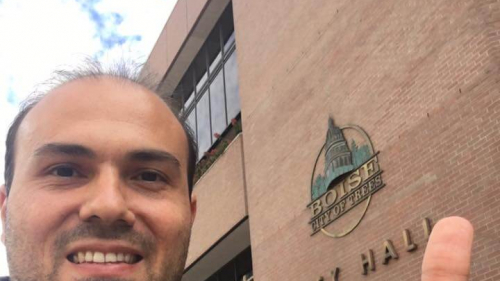 Four years ago as he sat in solitary confinement in an Iranian prison guilty of evangelizing, Pastor Saeed Abedini, who was freed earlier this year, said God showed him a vision that Republican presidential nominee Donald Trump would become president.

“I saw a young man with blue eyes, blond hair. I was sitting with him in a room,” Abedini, told The Huffington Post. “Someone told me, ‘He’s going to be the next president of the United States and you’re going to be friends with him.'”

Abedini told the publication that he did not know who the blond young man from his vision was at the time. When he got the opportunity to see the presidential candidates on a smuggled phone he purchased while still in prison last year he was puzzled because none of the candidates looked as young as the man he saw in his vision.

One night however, as Abedini was scrolling through Facebook posts, he saw a photo that looked a lot like the young man from his vision. It made his body shake. When he clicked on the photo, Abedini discovered it was Trump as a younger man.

“I believe that this was a vision from God,” Abedini told The Huffington Post. “Because you are not Christian, maybe this does not make sense for you. You need to just read the Bible.”

The Idaho pastor who spent 3 ½ years in prison in Iran before he was released earlier this year, announced last month that he was divorcing his wife Nagmeh Abedini who is also the mother of his two children.

“There are no words to describe the ongoing effect of the trauma I experienced and my family has experienced both during and in the aftermath of my imprisonment. We are different people, and we are hurting people. It pains me to say, but I have decided the only path toward healing is apart, and not together,” the pastor said in a statement announcing his divorce.

Abedini announced that on Oct. 21, he voted for the Republican presidential nominee.

“I am finally free in a free country. Last year on the same day I was sick and in chains for Christ, and now I can vote to choose my next president. And most amazingly, I can vote for someone that I know fought for me and called my name so many times. He met my family and gave them a $10,000 gift,” Abedini wrote about Trump in a Facebook post.

“I think his ideas are more Biblical than the other candidates. Hillary never called my name or called or met my family. As a woman who says she stands for women’s rights when she was foreign minister, she never contacted my mom, wife, sister or my daughter. She never did anything to help when I was in prison as an American pastor who was detained in Iran as a hostage,” he added.

Abedini told The Huffington Post that he is willing to return to Iran at some point to share the Gospel even though he knows he could end up in prison again.

“Preaching and prison has always been kind of a lifestyle for me. It’s not something that scares me,” he said. “Jesus had the same lifestyle … I know one day, God will call me back to Iran again.”