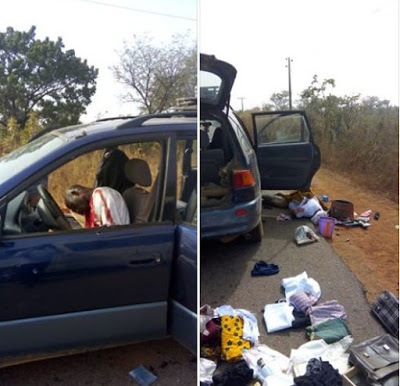 Suspected robbers have killed the pastor and his wife while they were on their way back to Taraba State after the NKST Church World-wide Choir conference held at Jaki, Kwande LGA of Benue State on Friday, Idoma Voice reports.

An Eyewitness has this to say: “I stopped at Gawa at about 8:14 this morning to buy some foodstuffs on my way to Bali to buy yams when some youngmen walked to men saying its better to getthe yams in the evening when the market is closing. Little did I know I was the target. Pushing me to hit the road so they can waste me… Oh God.. The pastor arrived shortly with a Toyota picnic. They bought yams I even helped to negotiate with the seller. We took off the same time before I stopped to excrete. Just seconds we heard gun shots and that was how they wasted this couple”Ben Dizwa, who confirmed the sad incident, identified the pastor as Mr. Joseph Tsafa, a retired police inspector who was one of the participant from NKST Nachi-Bali Classis in Taraba State.

“He left the event venue with his wife, Cecilia Tsafa, the woman leader (Kwase-hemen) of NKST Nachi-Bali Consistory women Fellowship, and Atese Anum (a pastor’s wife) on Friday evening for Zakibiam where they stayed through the night. Early this morning,(Saturday) the couple set out for Bali LGA of Taraba State where they are based. In Katsina-Ala, they assisted two women who were heading towards their direction making their number, five in the vehicle.At about 9am on Saturday morning of 3rd December, 2016, they passed a place called Gidan Gawa along Katsina-Ala —Takum road in Taraba State. There is a portion of road that is terribly bad that vehicles must slow down to avoid accident or damage, so they also slowed down.

Strangely, some armed young men came out of the bush and ordered them to stop and they simply obeyed. The came forth and demanded for money from Mr Tsafa. What really happened that led to a gun shot could not be ascertained by even eye witness but it is thought that the man had no enough money for them having stay away for nearly two weeks which they become annoyed and shot him still on the steering.

The bullet shot at the man penetrated and also killed his wife who was seated in the front seat. The remaining three persons who were seated at the back seat were not shot, they were searched and valuables taking away from them. As I write, the corpses of the couple has been deposited at a mortuary in Zakibiam, Ukum LGA