Photo: Catholic Priest Disrobed After He Was Discovered To Have Married Two Wives 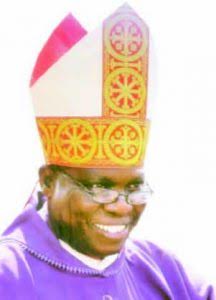 54 year old Very Reverend Father Peter Zuni of the
Queen of Apostles Catholic Church, Kakuri parish,
Kaduna State, was recently disrobed and sacked
by the Archbishop of the Kaduna Archdiocese,
Bishop Ndagoso Manoso (pictured above) after
his secret wife stormed the church to disclose her secret relationship with the Catholic priest.

The news came as a shock to the church because
according to the doctrine of the Catholic Church,
only unmarried men are ordained into the
priesthood as they are obligated to swear to an
oath of celibacy and observe perfect and
perpetual service for the sake of the kingdom of heaven. This, it is believed, would enable the
priests to easily remain close to Christ with an
undivided heart, and dedicate themselves more
freely to the service of God and the congregation.

According to The Sun, one of the wives is already late while the surviving one who blew the whistle
about three weeks ago over the secret marriage is
said to be nursing a child for the embattled priest.

Speaking on the development, the Archbishop of
Kaduna Catholic Diocese, Bishop Ndagoso
Manoso said Father Zuni’s second wife had
approached him in his office with a baby and
claimed Zuni was the father of her child. After due
investigation by his office, it was confirmed that the priest was her secret husband.

“It is very unfortunate that this thing had to
happen in my diocese. It is not an easy thing for
me; if I tell you what I have been going through in
the past few weeks over this issue; it has not been
easy for me. Father Zuni was my classmate; we
spent seven years in the seminary. At a time he proceeded to Kaduna Polytechnic and read
Accounting.

But this thing happened and nobody knew. But
he has to face the sanction. We sacked and
disrobed him because what he did is no longer
compatible with his vocation as a priest. It was not
true that he was transferred to any village.  He was
about to be transferred on normal routine, but when I heard of this story, I had to cancel the
transfer and sacked him. It is true that he had
affairs with two women and they both had
children for him, but one of the women is late
already. We are not God, we did not know on time
until now that he was having affairs with two women. The church said the priest has to go
because the church doesn’t allow priests to marry.
So he had to go and look after his children and his
matrimonial home. You can now imagine what the
priest is going through, either spiritually or
psychologically. He must be going through hell on earth. This is my concern for him now. The woman
and the kids will be going through trauma also. I
have been trying to see how I can help him, but I
don’t think I have the skills to help him. But he
needs help to come to terms with reality. By
December he will be 30 years in the priesthood, and he is now 54 years old, so at this age what
can he do with his life. Nobody can employ him
now. He spent seven years in the seminary and 30
years in the priesthood, and that is 37 years, so
what can he do with his life at 54? The church too
is going through a lot of trauma, so we need everybody’s prayers for us to put this incident
behind us.”he said in tears

Meanwhile the man in the eye of the storm, Father
Zuni, has neither denied nor confirmed the
allegation. In a telephone interview he said

“I find it difficult myself to believe what people are
saying about me. I will not comment on it now. I
will follow due process to invite you for an
interview, but I am afraid, the newspaper of the
archdiocese, The Cross News, may carry this story
before you (Sunday Sun)”.