Photos: African Pastor Begins The Year With A Private Jet – HIS 3RD JET 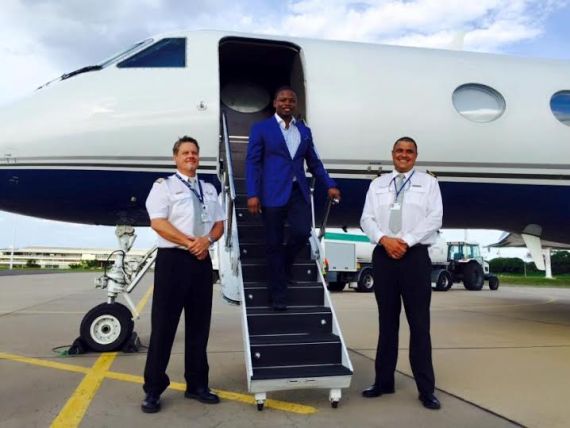 In an official ceremony organised by National Airways Corporation (NAC) in South Africa, the jet was unveiled and BUshiri the founder of Enlightened Christian Gathering Church (Bushiri Shepherd Ministries), in Malawi, was handed the certificate of a ZS-VIP by Larry Flynn, Gulf Stream Manager noting that he (Bushiri) is the youngest to afford a gulf stream jet.

Owning and maintaining private Jets cost a fortune; that’s why it is not so shocking to hear and see billionaires use them as luxury toys because they are typical money chasers and makers; we can get used to them but when it comes to “men of God”, it raises plenty eye brows. I mean, these are the people who will not fail to remind you that the world and everything in it is “vanity upon vanity, all vanity”, yet fly fleets of jets.

Prophet Bushiri just became the 2nd pastor in the world with the highest number of private jets after Bishop Oyedepo who has about 4 of them. When attacked for lavishing an amount that can help the poor on Facebook, the man of God replied thus: “When are you going to sell your phone which you have used to type here and give the money to the poor?”