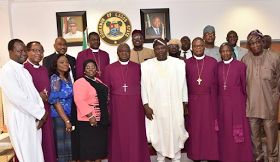 Anglican Archbishop of Ecclesiastical Province of
Lagos Mainland Diocese, Most Rev. Adebayo Dada
Akinde has commended the administration of
Governor Akinwunmi Ambode, saying the prompt,
positive and practical response of the government
contributed largely to the success story of the safe rescue of the three kidnapped female students of
Babington Macaulay Junior Seminary, Ikorodu.
Akinde who led other bishops of the Anglican
Church, Principal of the school, Ven. Olaoluwa
Adeyemi and parents of the three rescued female
students on a “thank you” courtesy visit to the Governor at the Lagos House, Alausa, Ikeja, on
Monday, March 7, said the success story of the
rescue of the girls cannot be complete without the
laudable efforts of the Lagos State Government. 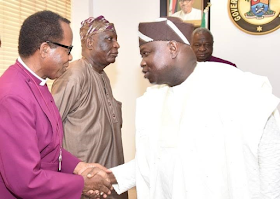 He said he and his team deemed it fit to come and
appreciate the role played by the state government
in the wake of the abduction of the students from
the school on February 29 and particularly the role
of Governor Ambode.

“It was a most traumatic moment and sad
for us as proprietors. Today we are
thanking God for his intervention that a
most unfortunate and traumatic event
ended on a joyous note.

“So when we talk about this success story
of the return of the three female students,
your Excellency your contribution is most
overwhelming, you have shown yourself to
be a passionate leader, a leader that is
interested in the well being of the citizens of the state that God has placed you as the
Chief Executive Officer at this time.

“So the main objective of our mission here is
to express immense thanks to your
Excellency for the support you gave us. We
are saying thank you, we are indeed
grateful, you have started well as the
Governor of the State, God will grant you the grace to continue and improve in the name
of Jesus. We sincerely appreciate you and
are immensely grateful,” Bishop Akinde
said.

Also speaking, Principal of the school, Ven.
Adeyemi said they were indeed grateful for the
support encouragement and prayers they received
from several quarters while the ordeal lasted. He
said with the security apparatus put in place by the
state government, it was game over for those who have taken to crime in Lagos.

“No hiding place for criminals in Lagos now,
because for the event that took place in the
past few days and that God in his infinite
mercy helped us and the security agencies
did their work well and the girls are with us
now. They are back in school and have reunited with their parents. I believe that
God is working in Lagos,” he said. 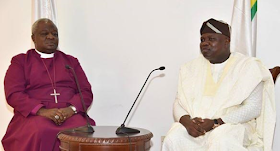 One of the parents of the recued girls, Ven. Ayo
Olusan said they were relieved with the return of
their girls, saying the prayers offered by Nigerians
and the prompt effort of the state government
played a huge role towards the rescue of the girls.
Responding, Governor Ambode said the incident was a test of the government’s commitment to the
security of lives and property in the state 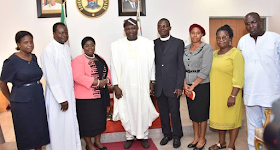 Governor Ambode also sent a strong warning to
criminals to desist from their nefarious activities,
warning that his administration is poised to spread
its security searchlight to every nook and cranny
of the state.

We know that Lagos is safe, we are
reiterating once again and sending a final
warning signal to all the criminals and
miscreants that have been disturbing the
peace of Lagos, this time around, we would
be in every nook and cranny of Lagos to secure the lives of everyone,” he s