Photos: Christian Man Whose Wife Was killed In Kano Meets With Governor Okorocha 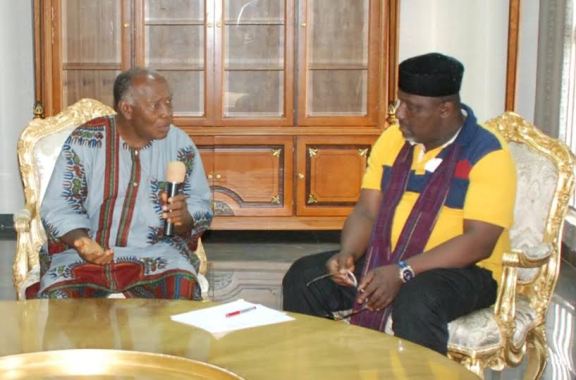 Pastor Mike Agbahiwe, an indigene of Orodo in
Mbaitoli Local Government of Imo State whose wife
was killed in Kano by Muslim Fanatics has, for the
first time since the incident happened, come back
to his home state. He met with Governor Rochas
Okorocha at the Government House in Owerri yesterday with his relations and explained that
contrary to the widely read report that his wife,
Mrs. Bridget Agbahiwe was beheaded, she was
beaten to death, not beheaded.

He told the governor details of what transpired
and how the wife was heartlessly and gruesomely
murdered in his presence by the Muslim Fanatics
and he survived the attack by the grace of God,
otherwise, he would have also been killed
because the aim of their attackers was to kill him and the wife. 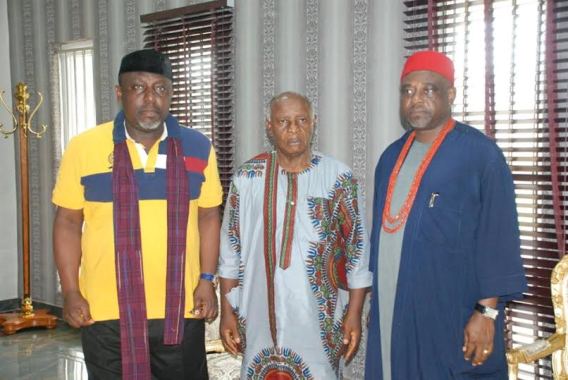 “One Muslim man called Dauda came to my wife’s
shop and was washing his leg infront of the shop.
My wife told the man to move up a little so that she
could arrange her goods, but the man refused.
Instead, the man started to molest her, and
gripped her neck. In trying to free herself from the grip, Dauda started shouting Alakuba, and angry
mob quickly gathered

“When we saw that danger was about to occur,
we ran and took refuge in the house of a
prominent Alhaji, who is a leader in the area. The
Alhaji did all he could to calm the mob down. They
refused and called him an infidel, and broke into
his house and killed my wife in front of me. And if not the quick intervention of the Police who
immediately used teargas to disperse them, they
would have also killed me. But they destroyed
everything I had both the shop, the car and so
on.”

He further stated, “The head of my wife was never
beheaded. But the hitting was on her head and
with hard objects. The body of my wife is in the
mortuary with the head. She was not beheaded as
it was widely reported.”

In his response to the pathetic story of Pastor
Agbahiwe, Governor Okorocha described Late Mrs.
Bridget Agbahiwe as a heroine because it took
more than one hundred men and women to bring
her down, describing the gruesome murder of the
woman as highly provocative, barbaric and the highest wickedness of mankind, and told Pastor
Agbahiwe that the Imo State government would
share with him and the family in this moment of
grief and pains.

Governor Okorocha said, “The problem is not the
death of Mrs. Agbahiwe but the manner of which
she was killed. In this country, we must learn to
live peacefully. No religion supports killing.
Anyone who kills in the name of religion is an evil
worshipper, and should never mention the name of God. The cold blooded murder of Mrs.
Agbahiwe should be seen as a sacrifice for the
unity of the country”.

The governor further stressed, “She died as a
martyr. Imo State Government will be with the
family in this period of grief, and we shall set up a
committee to assist in making sure that she is
given a befitting burial. She died a heroine as far as
we are concerned, as it took more than one hundred attackers to kill her. Those who killed the
woman are cowards. The chairman of the
traditional rulers’ council in the state would lead a
delegation to the Emir of Kano to make sure that
such ugly incident will never reoccur anywhere in
the country.”

Governor Okorocha also stated, “We are
monitoring the situation and the reports reaching
me is that five people have been arrested and
taken to court, and finally remanded in custody in
connection with the murder of Mrs. Bridget
Agbahiwe. This is good enough. It means the Kano State Government and the Police Command
in Kano are working to live upto their assurances
to me that they would fish out the killers and make
them face the full wrath of the law.”

The governor urged Pastor Agbahiwe not to
question God over the killing of the wife, but to
bear the whole incident with fortitude.