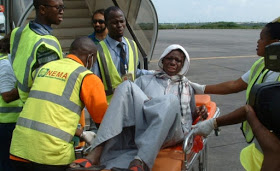 Nigerian Prophet, T.B. Joshua, has splashed N6m
($30,000) on over a hundred Nigerian deportees
who arrived from Libya on the evening of Thursday
16th June, 2016.

According to media reports, 162 Nigerians were
deported from the North African nation with the aid
of the International Organisation for Migration
(IOM) in collaboration with the Swiss government
and the Nigerian Embassy in Libya.

However, rather than return home, 107 decided to
‘seek refuge’ at The Synagogue, Church Of All
Nations (SCOAN), the popular Lagos-based church
of T.B. Joshua.

According to a post on Joshua’s official Facebook
Page, after feeding the dishevelled and frail-looking
Nigerians who arrived at the church late in the
night, the sum of N50,000 was given to each of
them alongside a bag of rice. 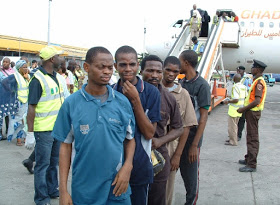 “Let me be honest with you, if not for this gift from
T.B. Joshua, I had the plan of joining the militants in
the Niger Delta,” admitted Friday, a returnee from
Delta State, who fell to his knees in gratitude after
receiving the gift.

The deportees explained to this reporter that most
of them had been surviving by doing menial jobs in
the war-torn nation before being arrested and
imprisoned.

“We came back with nothing but the clothes on our
backs which were given to us by United Nations
officials,” said Michael, an Edo State indigene who
had been in Libya for nearly ten months, washing
cars for a living while nursing the hope of reaching
Europe one day. 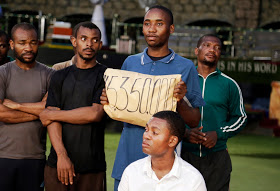 Arrested in February for staying illegally, Michael
endured several months in a Libyan prison before
the insufferable conditions of the prisoners
attracted the attention of United Nations officials
who procured their eventual release.

“I was thinking of how I was going to start my life
again,” he admitted. “Many of us would have ended
up in crime if not for this gift.”

Upon arrival, the National Emergency Management
Agency (NEMA) provided transportation vehicles
for the returnees to their respective states along
with a gesture of N10,000 by the Swiss
government. 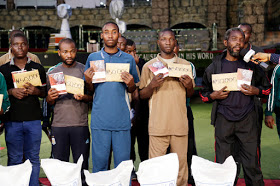 However, the majority chose to seek help from
Joshua, who is famed for his extensive
humanitarian gestures.

“We decided to come to The SCOAN because we
know how Prophet T.B. Joshua has been helping
people around the world,” Michael explained,
referring to multiple other occasions where Joshua
has rendered assistance to Nigerian deportees.

“I can only thank the man of God. Which other
Nigerian could have done this for us at such a time
in this country?”he tearfully pondered, decrying the
muted response from the Nigerian government to
their plight.

According to Collins, the young Nigerian had no
intention to traverse Libya. Wild promises from a
‘friend’ of a glamorous life in Europe lured him
away from a stable job in Abuja, not knowing that
the European dream would lead him to a Libyan
dungeon.

The fantasy turned to a nightmare as Libyan police
broke into the commune where he was residing
with dozens of other Nigerians en-route to a ‘better
life’ abroad that never materialised.

“We are not here to blame or accuse the Libyan
government,” he stated, recounting the inhumane
conditions he endured in prison in which several of
his colleagues died.

One of the deportees hobbled to the church on
crutches.”I had a serious motor accident shortly
after arriving to join my wife in Libya,” he narrated.
“I have been in pain ever since but I thank God for
using Prophet T.B. Joshua to wipe our tears away
today.”