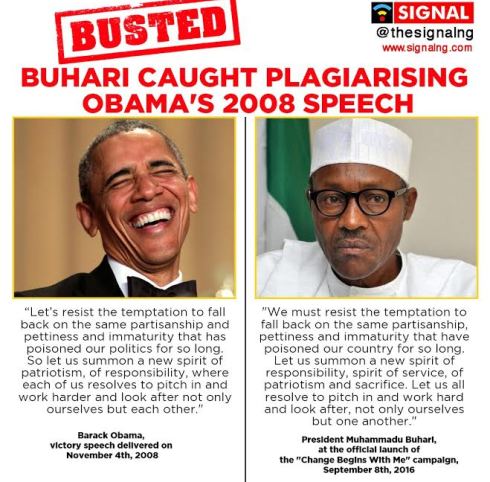 A part of President Buhari’s speech (right)
contained largely the same arrangement of words
and emotional outburst that President Obama
used in his 2008 victory speech (left) after he was
elected the first American black president.
Reacting to the report, Senior Special Adviser to President Buhari on Media and Publicity, Shehu
Garba, says the official responsible for the speech
will be sanctioned

Below is the statement issued by Shehu Garba
Shehu, SSAP Media and Publicity to the President:

The Presidency wishes to respond to a story on
alleged plagiarism in a Presidential Speech that has
been trending for most of today.
The Presidency observed that the similarities
between a paragraph in President Obama’s 2008
Victory Speech and what the President read in paragraph nine of the sixteen-paragraph while
inaugurating the “Change begins with me” are too
close to be passed as coincidence. There was a
mistake by an overzealous administration staff
and we regret that this has happened.

A Deputy Director in the Presidency has accepted responsibility for the insertion of the contentious
paragraphs even when a query to him was being
typed.

This serious oversight will be investigated
thoroughly and appropriate punishment meted.
The Presidency, once again regrets this unfortunate incident. Measures have been put in
place to ensure that this does not happen again.
President Muhammadu Buhari admonished
Nigerians to move past incident and focus on the
message of change which the country needs in
order to restore our cherished value systems.