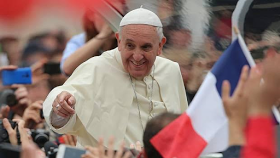 Pope Francis used his weekly Sunday message to
denounce paedophilia, following the emergence
of new details surrounding the alleged rape and
murder of an Italian girl- child in 2014.

The Pope’s comments followed new revelations in
the case of a six-year-old girl who died in June
2014, after allegedly being thrown from an
eighth-story balcony in Naples.
A 43-year-old man is being held in a prison in
Rome charged with throwing the girl from a housing block in a deprived area of the city after
raping her, following a re-opening of the case. The
man has denied the charges

“This is a tragedy. We should not tolerate
the abuse of minors,” said Pope Francis, in
his message and blessing at St Peter’s
Square.

“We must protect our minors and severely
punish abusers.”

The Pope has vowed a “zero tolerance” for
abusers in the Church, however victims groups
have accused him of not doing enough. S