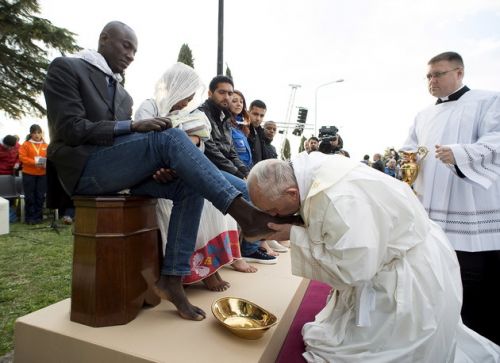 After his five-hour visit to Greece, Pope Francis
took three families of Syrian Muslim refugees,
including six children, back to Rome aboard
the papal plane on Saturday.

The pontiff met refugees in a fenced complex
on the Aegean island of Lesbos in Greece,
where adults and children broke down in tears
before him, according to Reuters.

“The Pope has desired to make a gesture of
welcome regarding refugees, accompanying
on his plane to Rome three families of refugees
from Syria, 12 people in all, including six
children,” the Vatican said in a statement.

The homes of the three families had been
bombed in the Syrian war.

“Though many of their graves bear no name,
to you each one is known, loved and
cherished,” Francis prayed at the Moria refugee
camp in Lesbos, according to Catholic News Agency. “Wake us from the slumber of indifference, open our eyes to their suffering
and free us from the insensitivity born of world
comfort and self-centeredness.”

In his prayer, the pope said, “We are all
migrants, journeying in hope” toward God in
heaven.

On the plane, Francis told reporters that one of
his aides came up with the idea of bringing a
few refugees back with him to Rome. “I felt the
Spirit was talking to us… Everything was done
according to the rules,” he was quoted as
saying.

The pope also said it was not deliberate that all
refugees who were brought to Rome were
Muslims. He explained that the papers of two
Christian families that had originally been on
the list were not in order.

“We have come to call the attention of the
world to this grave humanitarian crisis and to
plead for its resolution,” Francis said during his
visit to the Moria camp, where leaders of
Eastern Orthodox Christian churches joined
him, according to The New York Times.

“As people of faith, we wish to join our voices
to speak out on your behalf,” the pope added.
“We hope that the world will heed these scenes
of tragic and indeed desperate need, and
respond in a way worthy of our common
humanity.”

Francis also urged Europe to act according to
its claim of being “the homeland of human
rights.”

“Whoever sets foot on European soil ought to
sense this, and thus become more aware of the
duty to respect and defend those rights,”
Francis said.

Hundred of thousands of people from Syria,
Iraq and elsewhere are fleeing violence,
persecution, civil wars and poverty, and are
searching for asylum. The European Union,
however, has detained several migrants
arriving in Greece and deported some back to their countries of origin.

Praising the people of Lesbos, who have
helped refugees, the pope added, “In these
lands, the cradle of civilization, the heart of
humanity continues to beat; a humanity that
before all else recognizes others as brothers
and sisters, a humanity that wants to build bridges and recoils from the idea of putting up
walls to make us feel safer. In reality, barriers
create divisions instead of promoting the true
progress of peoples, and divisions sooner or
later lead to confrontations.”