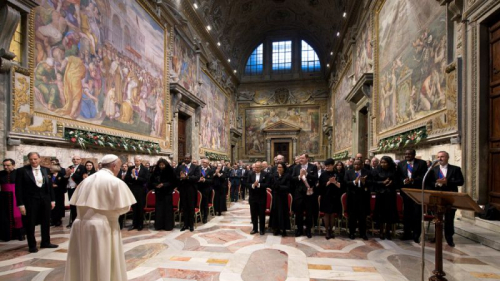 Pope Francis has condemned militant Islamist violence as “homicidal madness” on Monday and said leaders should improve social conditions that serve as fertile ground for fundamentalism and radicalisation.

Before diplomats from more than 180 countries, he also forcefully restated a call to ban nuclear weapons, saying experiments by North Korea to build long-range missiles risked setting off a new nuclear arms race.

Francis, delivering the annual papal “state of the world” address, also spoke of the need to defend European unification and for greater unity in facing climate change.

The Argentine-born pontiff, 80, reserved his toughest words of condemnation for the wave of “fundamentalist-inspired terrorism” in 2016, listing attacks by Islamist militants in Europe, Africa, Asia and the United States.

“Sadly, we are conscious that even today, religious experience, rather than fostering openness to others, can be used at times as a pretext for rejection, marginalisation and violence,” he said in the Vatican’s Sala Regia.

“We are dealing with a homicidal madness which misuses God’s name in order to disseminate death, in a play for domination and power. Hence I appeal to all religious authorities to join in reaffirming unequivocally that one can never kill in God’s name,” he said.

Francis said religiously inspired violence “is the fruit of a profound spiritual poverty, and often is linked to significant social poverty. It can only be fully defeated with the joint contribution of religious and political leaders.”

He urged government leaders to enact “suitable social policies aimed at combating poverty” and invest in education and culture.

He said they “could destabilize the entire region and raise troubling questions for the entire international community about the risk of a new nuclear arms race.”

Francis called for an end to the arms trade, adding that easy access to weapons, “even those of small calibre,” aggravates conflicts and fosters insecurity and fear.

Building peace also meant respecting the environment, he said, backing the landmark 2015 global deal struck in Paris, and hoping that tackling climate change “will meet with increased cooperation on the part of all”.

His stand on climate change has put him in direct conflict with U.S. president-elect Donald Trump, who said during the campaign that it was a hoax perpetrated by China and threatened to rip up the deal signed by President Barack Obama..

Since winning the election, Trump has said he will keep an “open mind” about the deal.