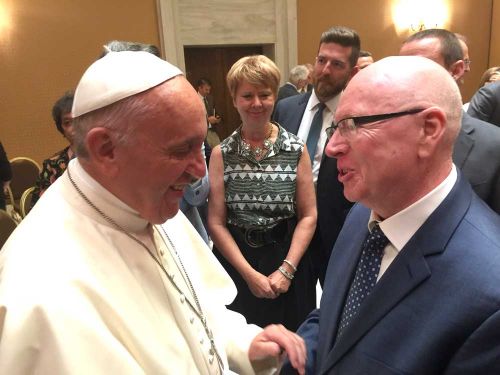 Pope Francis and several prominent Evangelical
and Pentecostal leaders met in Rome last Friday
to discuss areas of mutual agreement and
where they respectfully disagreed. The aim of
the gathering, which had no official agenda,
was to build unity between Christian traditions that have historic enmity.

The Rev. Dr. Geoff Tunnicliffe, former secretary
general of the World Evangelical Alliance and
chairman of the Advisory Board of Christian
Media Corporation, said in an interview with
The Christian Post Tuesday, that there was a
John 17 spirit during the two meetings he had with Pope Francis. Tunnicliffe noted that formal
meetings with the pope are often said to last
only 30 minutes but one informal meeting with
Francis and Evangelical and Charismatic leaders
lasted over two hours. Those at the gathering
sensed the presence of God, according to Tunnicliffe, and a unity of the Spirit as their
discussions focused on Jesus Christ even as
they talked about theological differences.

“These theological discussions have to take
place in the context of relationship. Otherwise
they become cold. And we are thankful for
those opportunities where it is about building
friends, while not dismissing the theological
distinctives,” the former WEA leader explained. These relationships are what “help create the
framework for the deeper discussions as well.”

Italian Pentecostal minister Giovanni Traettino
was one of the key conveners of these
meetings with Francis, with the two having
enjoyed a steady friendship over many years.
In July 2014, Pope Francis traveled to
Traettino’s Church of Reconciliation in the southern Italian city of Caserta to apologize for
the persecutions Pentecostals experienced at
the hands of Roman Catholics. As was widely reported at that time, Francis, whose papacy had just begun the previous year, said: “I ask
for your forgiveness for those who, calling
themselves Catholic, didn’t understand we’re
brothers,” and called for a “Church that is one
in its diversity.”

Tunnicliffe mentioned in the interview with CP
that these kinds of apologies were
reciprocated by several Evangelicals in the
meeting who had themselves mistreated
Catholics in their respective communities. Those
gathered articulated the need for greater reconciliation in the Church as a whole,
emphasizing the desire to see Christ’s prayer in
John 17:20-23 be fulfilled.

In that passage, Jesus prayed for all who
would believe in him through the message of
his disciples:

“My prayer is not for them alone. I pray also for
those who will believe in me through their
message that all of them may be one, Father,
just as you are in me and I am in you. May they
also be in us so that the world may believe that
you have sent me. I have given them the glory that you gave me, that they may be one as we
are one — I in them and you in me — so that
they may be brought to complete unity. Then
the world will know that you sent me and have
loved them even as you have loved me.”

Pope Francis also reached out to Evangelicals
and show a spirit of unity through the
Together 2016 event, with news last week that
he will record a greeting for next month’s rally
that seeks to bring 1 million Christians for
prayer and worship at the National Mall in Washington, D.C.

The Together 2016’s website reads: “Jesus directly challenged a culture of division. He
prayed we would be one — one family, one
body. And He told us to love our enemies.
Everyone loves their friends; it’s when we love
those who aren’t like us that the world takes
note. It’s time to come together around Jesus in a counter-cultural moment of unity and love for
each other.”

Tunnicliffe concluded, “I don’t think we have to
wait another 500 years for another
Reformation. God is doing some amazing
things around the world for which I am
thankful.”