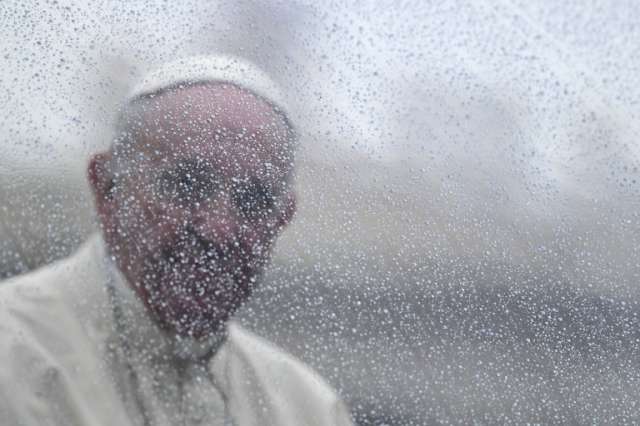 Pope Francis has said he is not losing any sleep over a challenge from a group of conservative cardinals who have accused the Argentine of contradicting Church teaching.

The comments published Friday in the Avvenire, the newspaper of the Italian conference of bishops, follow a direct challenge to the pope’s authority from American Cardinal Raymond Burke, who has threatened to undermine Francis’ authority in a row over the rights of remarried divorced couples.

Burke said in an interview earlier this week that it may be necessary to make a highly rare “formal act of correction” if Francis does not answer a letter he wrote with three other cardinals calling for clarification on a document penned by the pope on the theme of the family.

The challenge is “not making me lose any sleep“, the 79-year-old Argentine told Avvenire.

“Sometimes criticisms are merely aimed at vindicating already fixed opinions (rather than fuelling debate). They are not honest, they are driven by a mean spirit to incite divisions,” he said.

Despite shrugging off the issue, the pope’s decision not to convene a traditional meeting of cardinals ahead of a ceremony Saturday to appoint 17 new “princes” of the Church is being read by some as a move to avoid a show-down with the conservatives.

‘Persist in not understanding’

Vatican expert Marco Tosatti said it was likely plans had been afoot to “resubmit” the letter, “not only among the signatories of the request for clarification, but also perhaps other cardinals, eager for a decisive word from the pope”.

That would be a situation Francis would have “preferred to avoid“, he said on his blog.

Cardinals Raymond Burke, Carlo Caffarra, Walter Brandmueller and Joachim Meisner had warned in their letter of a “grave disorientation and great confusion of many faithful”.

Francis told the Avvenire: “Some persist in not understanding.”

“It’s either black or white (for them), though it’s in the flow of life that decisions must be made” on what is right or wrong, he said, referring to his belief that the Church must be more flexible when examining individual cases of sinners or the outcast.

Francis said his attitude was in line with the reforms brought about under the Second Vatican Council in the 1960s.

“Historians however say 100 years are needed for a council to be absorbed well by the body of the Church. We’re half way there.”

The conservative arm of the Church has been thrown into disarray by a debate over whether those who have divorced and remarried can receive Communion. Critics say such a move would be contrary to teachings on the sanctity of marriage.

While Francis made no direct reference to the issue in his document on the family, some bishops have interpreted his words as meaning some remarried people can be given Communion.

“This idea… that the Pope should be some kind of innovator, who is leading a revolution in the Church or something similar, is completely foreign,” Burke, 68, said in an interview with the National Catholic Register this week.

“There is, in the tradition of the Church, the practice of correction of the Roman Pontiff. It is something that is clearly quite rare”.

But should the pope ignore the request for clarification, “then I would say that it would be a question of taking a formal act of correction of a serious error,” he said.

The American has been the face of opposition to change since Francis was elected in March 2013.

He was moved out of key Vatican positions at the end of 2014 and into a more ceremonial post as patron to the Knights of Malta but has remained a vocal critic of the pope’ reformist approach.