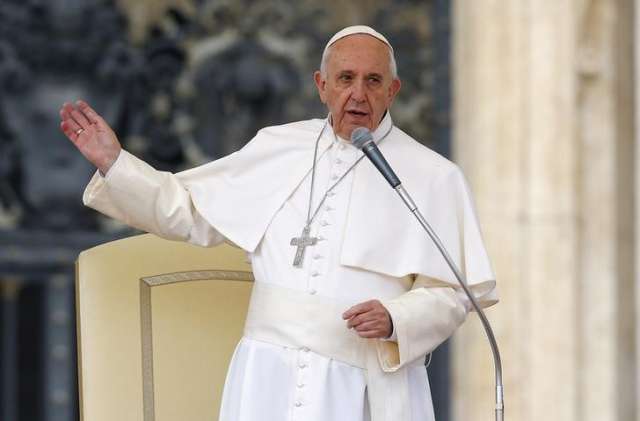 Pope Francis urged Armenia and Turkey on Saturday to seek reconciliation and to shun “the illusory power of vengeance” a century after 1.5 million Armenians were massacred in the dying days of the Ottoman Empire.

Francis made the appeal in an evening prayer service with leaders of the Armenian Apostolic Church on the second day of a trip in which he has risked Turkey’s anger by labelling the events of 1915 a genocide, a term Ankara rejects.

That underlying dispute, as well as differences over Yerevan’s support of the ethnic Armenian enclave of Nagorno-Karabakh in Azerbaijan, have led to fraught relations that include closed borders and a lack of diplomatic ties.

“May God bless your future and grant that the people of Armenia and Turkey take up again the path of reconciliation, and may peace also spring forth in Nagorno-Karabakh,” he said at the outdoor prayer service in a Yerevan square.

He called on nations to “resist being caught up in the illusory power of vengeance”.

A nation’s collective memory has been a key theme
of the trip. At the prayer service on Saturday night, he said “memory, infused with love” could make “designs of hatred become projects of reconciliation”.

On Saturday morning, a sombre Francis paid tribute to massacred Armenians during a visit to Tzitzernakaberd, the official genocide memorial and museum, whose centrepiece is a towering granite needle on a hillside overlooking the Armenian capital.

“Here I pray, with pain in my heart, so that never again will there be tragedies like this, so that humanity does not forget and knows how to overcome evil with good,” he wrote in the guest book in Italian.

On Friday night in a speech to the president, the government and diplomats, Francis departed from his prepared text to use the word “genocide”, a description that infuriated Turkey when he first used it a year ago.

Turkey waited more than 24 hours to react, indicating it did not want the incident to blow up into a new diplomatic dispute. Last year Ankara recalled its ambassador to the Vatican and kept him away for 10 months.

“Of course the pope’s statement is very unfortunate,” deputy prime minister Nurettin Canikli told reporters. “It is unfortunately possible to see all the reflections and traces of Crusader mentality in the actions of papacy and the pope.”

Turkey accepts that many Christian Armenians living in the Ottoman Empire were killed in clashes with Ottoman forces during World War One, but contests the figures and denies that the killings were systematically orchestrated and constitute a genocide. It also says many Muslim Turks perished at that time.

The pope returns to Rome on Sunday night.