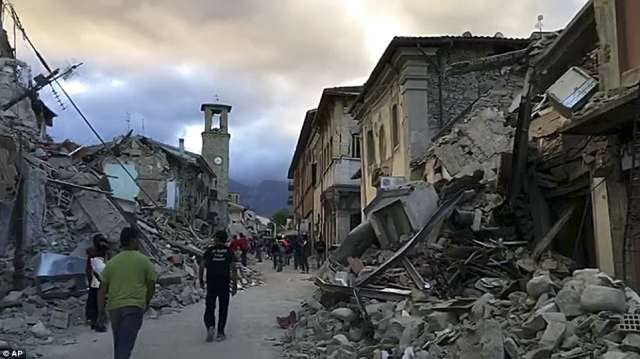 A huge earthquake near Norcia in Umbria,
central Italy, caused Pope Francis to say the
rosary and pray for victims

According to Daily Mail, the natural disaster was powerful that it reached the centre of Rome, along with the rest of the European country, killing at least 38 people, including two children.

This terrible occurrence caused Pope Francis to turn his normal audience talk to a prayer session for the victims and survivors of the earthquake.

Catholic Herald reports that the Pontiff led the estimated 11,000 pilgrims and tourists in St Peter’s Square to recite the sorrowful mysteries of the rosary.

He also prayed that “the Lord Jesus, who is always moved by human suffering, would console the broken hearted and give them peace.”

hearing the news of the earthquake that has struck central Italy and devastated entire areas, leaving many dead and wounded, I cannot fail to express my heartfelt sorrow and my closeness to everyone in the earthquake zone, especially those who lost loved ones and “those who are still shaken by fear and terror.”

“Having heard the mayor of Amatrice say, ‘The town no longer exists,’ and knowing that there are children among the dead, I am deeply saddened,” he added.

The Pope also said a prayer, through his Instagram account, along with a picture of the rosary.

“Let us be moved with the compassion of Jesus and united in prayer with those affected by the earthquake”, he wrote.

The earthquake, which happened by 3a.m, destroyed a lot of properties, leaving many trapped under the rubble and unaccounted for.