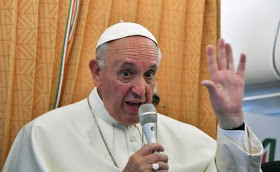 Despite the bible condemning Homosexuality in
Leviticus 18:22, ‘You shall not lie with a male as
one lies with a female; it is an abomination.'(NIV
version), the leader of the Roman Catholic church
Pope Francis has made some controversial
statements saying that the Roman catholic church should apologize to gays for offending them.

While on a press conference aboard the Papal
Plane on his way from Armenia, Pope Francis
responded to a question from a journalist about a
German Cardinal who said the Catholic Church
should apologize for being “very negative” about
gays.

The Pope was also asked, by the same journalist,
whether Christians bear some blame for hatred
toward the LGBT community, as horrifically
demonstrated in the Orlando massacre at a gay
night club that killed 49 people on June 12. 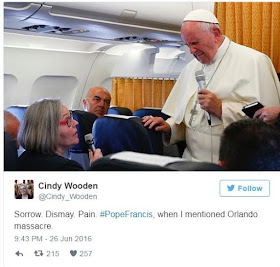 “I repeat what the Catechism of the Catholic
Church says: that they must not be discriminated
against, that they must be respected and
accompanied pastorally,”

“The Church must ask forgiveness for not
behaving many times — when I say the Church, I
mean Christians! The Church is holy, we are
sinners!”

“I believe that the church not only should
apologize to the person who is gay whom it has
offended,” he added, “but has to apologize to the
poor, to exploited women, to children exploited
for labor; it has to ask forgiveness for having
blessed many weapons.”

“One can condemn, but not for theological
reasons, but for reasons of political
behavior…Certain manifestations are a bit too
offensive for others, no?
“But these are things that have nothing to do with
the problem. The problem is a person that has a condition, that has good will and who seeks God,
who are we to judge? And we must accompany
them well.”

He told reporters on the plane “there are traditions
in some countries, some cultures, that have a
different mentality about this question
(homosexuals)” and there are “some (gay)
demonstrations that are too offensive for some”.

The pope did not elaborate on what he meant by
seeking forgiveness for the Church “having
blessed so many weapons”, but it appeared to be
a reference to some Churchmen who actively
backed wars in the past.