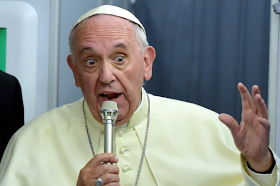 Pope Francis, has stated that the restriction on women becoming priests will not be lifted. Speaking to a Swedish journalist on Tuesday, during a press conference on-board his papal plane, the Argentine, Pope said:

‘On the ordination of women in the Catholic Church, the last word is clear,’ Francis said, referring to an apostolic letter written by Pope John Paul II in 1994. The letter holds that ordaining women was not possible because Jesus chose only men as his apostles. ‘It was given by St. John Paul II, and this stands.

“But for ever, for ever? Never, never?” the reporter asked in a follow-up question and Pope Francis replied:

‘If we read carefully the declaration by St John Paul II, it is going in that direction.’