Pope Francis: ‘The World Is That War’ – But It’s Not A Religious Conflict 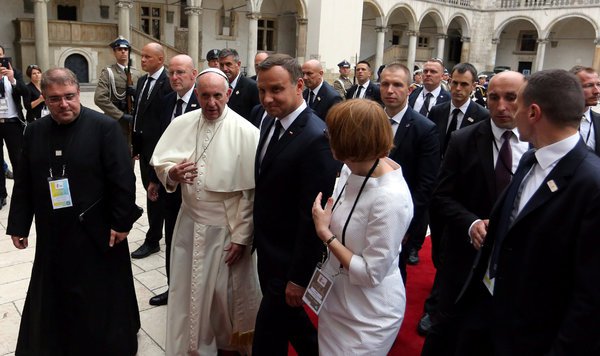 KRAKOW, Poland — As he began his first official
visit to Poland, Pope Francis on Wednesday said “the world is at war,” and he challenged the
conservative governments of Central and Eastern
Europe to soften their resistance to migrants seeking refuge.

The pope’s visit to the southern Polish city of
Krakow to celebrate World Youth Day, a major
event on the Roman Catholic calendar, began just a
day after the horrific killing of a priest in France.

The priest, the Rev. Jacques Hamel, 85, was
celebrating Mass in a small town in Normandy
when two men with knives entered the church and
slit his throat. The Islamic State claimed
responsibility for the attack.

Francis, 79, was clearly shaken by the attack, and
he appeared solemn and pensive as he headed to Poland, the first stop on a trip to Central and Eastern Europe.

“The world is at war,” he told reporters on his plane
from Rome to Krakow. “We don’t need to be afraid
to say this.”

But with anti-Muslim sentiment growing after the
recent Islamic State-inspired terrorist attacks in
France and Germany, Pope Francis emphasized that he did not see a religious conflict. “I am not
speaking of a war of religions,” he said. “Religions
don’t want war. The others want war.”

He said he was referring to “a war of interests” and
a war for money, resources and the “domination of
peoples.”

Three days before the pope’s arrival in Poland, the Vatican issued a statement reprimanding Polish officials who “artificially created fear of Muslims.”

Poland, like other states in Central and Eastern
Europe, has refused to accept its quota of refugees
as requested by the European Union. After the
recent attack in Nice, Interior Minister Mariusz Blaszczak assured Poles that borders would remain
sealed to ensure their safety.

On Wednesday, as Francis addressed more than a
million young Catholics who had traveled to
Krakow from around the world, he praised Poland
for its ability to “establish a national community on
the foundation of its human, social, political,
economic and religious heritage,” and then called on Poles to respect “the complex phenomenon of
migration,” which “calls for great wisdom and
compassion, in order to overcome fear and to
achieve the greater good.”

“Also needed,” Francis said, “is a spirit of readiness
to welcome those fleeing from wars and hunger,
and solidarity with those deprived of their
fundamental rights, including the right to profess
one’s faith in freedom and safety.”

Prime Minister Beata Szydlo said she did not see the
pope’s comments as a rebuke of Polish officials.

“What the Holy Father said was that we need to
stick together,” Ms. Szydlo said during a briefing for
reporters. “The times are becoming increasingly
hard, and only in unity can we can find the solution
to our problems.”