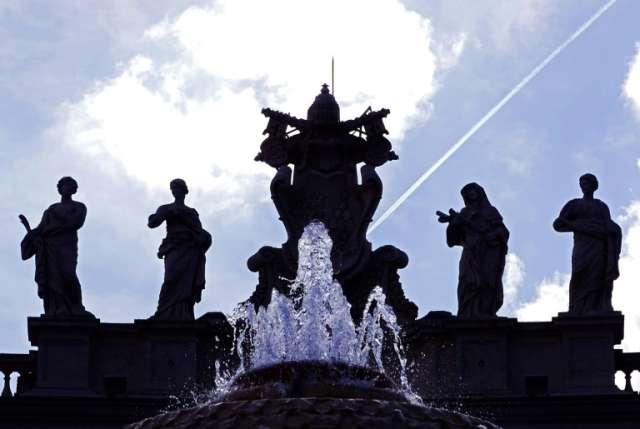 A real-life version of the hit political drama “House of Cards” is unfolding at the Vatican, from cardinals openly defying the pope to anonymous posters sullying his name.

The Vatican has become a stage for drama as critics and supporters of Pope Francis speak out  (AFP/File)
A real-life version of the hit political drama “House of Cards” is unfolding at the Vatican, from cardinals openly defying the pope to anonymous posters sullying his name.
In the latest episode, a group of powerful Princes of the Church released a statement defending Pope Francis — but religious watchers warn the move could backfire and work in the favour of his conservative challengers.

“No pope controls everything,” said Vatican expert Luigi Accattoli. “There has always been some resistance, even from cardinals.”

But this time the critics are “louder and more numerous”.

The root of the row lies with the Argentine pontiff’s calls for the church to be more understanding towards those it considers “sinners”, and in particular his intimation last year that some believers who have divorced and remarried should be able to take communion.

Traditionalists were horrified; Roman Catholic marriage is for life, so divorcing your first partner for whatever reason and marrying someone else is considered adultery.

Four conservative cardinals accused the pope of sowing confusion and demanded an answer to “doubts” about family guidelines Francis published in April.

Resistance, support
US cardinal Raymond Burke took on the guise of conspirator-in-chief, warning the 80-year-old pope in November that he could be sanctioned if he does not reply.

Religious watcher Sandro Magister told AFP that inside the Vatican there was “great resistance towards a pope who opens doors in every direction and is ambiguous”.

Francis said he was “not losing sleep” over the challenge to his authority. But another run-in with Burke was in the offing.

The pontiff had already demoted the American two years previously when he moved him from a top Vatican job in 2014 to be the “patron” of the Knights of Malta.

In January, after a row between the Vatican and the ancient order, Francis appointed a “pontifical delegate” to help run the Knights — sidelining Burke again.

As soon as he did, a series of anti-pope posters were plastered all over Rome by unidentified agitators. The following week, a satirical spoof of the Vatican newspaper L’Osservatore Romano appeared, with a fake pontiff shown flip-flopping over the questions put to him by the four cardinals.

Francis’s “C9” council of cardinal advisers clearly felt action was needed. On Monday it issued a statement via the Vatican expressing its “full support” for the pope.

‘Unintended consequences’
C9 member Reinhard Marx said that while bickering may be par for the course in the ancient institution, the council had felt it was time to reaffirm its “loyalty”.

The German cardinal told journalists on Wednesday the C9 “didn’t want to make a great thing of it, a great drama” in backing Francis.

Another cardinal, Francesco Coccopalmerio, released a book published by the Vatican press backing the pope’s opening on the possibilities for remarried divorced people to take communion.

But Vatican expert John Allen said their support could be a double-edged sword and risked having “unintended consequences”.

“Generally speaking, you know a manager is in trouble when somebody has to put out a statement expressing ‘full confidence’ in his or her leadership,” he wrote in Cruxnow.com.

“By engaging it in such a high-profile way,” the statement risked lending “a significance to the anti-Francis blowback” that it did not have before, he said.