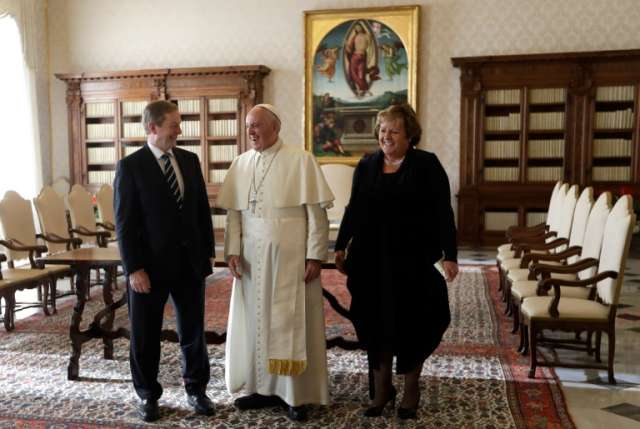 Pope Francis will visit Ireland in August 2018 for the World Meeting of Families, Irish Prime Minister Enda Kenny said on Monday after meeting the pontiff in Rome.

Alongside a photo of him and Francis laughing, Kenny wrote on Twitter: “Pope Francis has been an important voice for the young, the poor and disadvantaged — glad he will visit Ireland in 2018.”

The Vatican, which has yet to confirm any papal travel plans even for 2017, did not comment on the news.

A Vatican statement said the two had held “cordial discussions” on a wide range of subjects, including the migrant crisis, “political and institutional” challenges in Europe and youth employment.

Kenny told the Irish Times the meeting had been “completely relaxed and very friendly“.

It was a far cry from the animosity between Ireland and the Holy See in 2011 when Kenny slammed the Vatican for“dysfunction, disconnection and elitism” in its failure to tackle clerical child sex abuse.

That came a week after a report in Ireland accused the Roman Catholic Church of failings in its handling of abuse allegations against 19 clerics in the diocese of Cloyne, southern Ireland.

The Vatican responded by recalling its envoy to Ireland and closing its embassy in Dublin. It was only reopened in 2014.

This time, though, Kenny was full of praise for Francis, who, on a US visit last year pledged “the zealous vigilance of the church to protect children and the promise of accountability for all.”

Kenny said: “I did refer him to his own comments in America when I think he was very clear about members of the clergy who abused children and his statement on that was quite clear and very strong. I agreed with him 100 percent.”

Kenny also said the pair had discussed the possibility of the pope visiting Northern Ireland.

However, some political voices have expressed concern about the pope visiting at a time when Ireland may hold a referendum on whether to legalise abortion, suggesting he could be tempted into commenting on the subject.