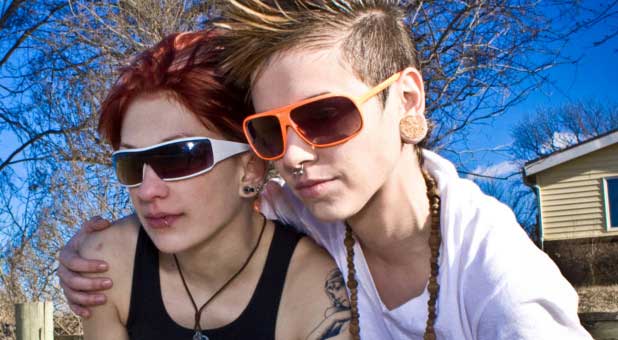 It took me a couple of years before I could work
up the courage to go back home for a visit. I
wouldn’t go alone and took my girlfriend, Ann,
and her daughter, with me. My mom was very
warm and welcoming, even loving toward all
three of us. I thought perhaps things had changed in the nearly seven years I’d been
gone.
She pulled me aside and said, “Michelle, I love
you, and you are all welcome to stay here
tonight, but you’ll have to sleep in separate
rooms.”

I was mad, but I understood and appreciated
the forewarning. We went to a hotel.

Mom continued to love on us by sending cards
and money on birthdays and holidays. I joked it
wasn’t fair Ann got the same amount of money
on her birthday as I did from my parents.

I began studying Kabbalah and the Zohar (both
Jewish mysticism), and I decided I needed to talk
to a rabbi, to learn as much about the
foundational aspects of Judaism as possible
before I could truly attain proficiency in Jewish
mysticism. At the time, this seemed to fall within the realm of “normal” for me. I met with a rabbi
in the Reformed tradition, one who assured me it
was OK to continue my life as a practicing
lesbian.

Although the thought of entering a Christian
church or speaking to any of my former mentors
and friends who were Christians almost sickened
me, I could read the Bible if I was doing it to
pursue Jewish knowledge. I stuck to the Old
Testament, which kept me safe from the pesky and disturbing writings of Paul. I couldn’t deal
with Jesus either, but that was OK for now. He
seemed safely ensconced in the New Testament.

What I didn’t intend during my course of study
was to have feelings about God emerge. I began
to sense an awareness of Him again. My previous
experiences into other forms of spirituality (or
non-spirituality) had always been to soothe an
ache, but had always been unsuccessful. They were fun, scary, encouraging or wishful, but
never fulfilling. I began to pray the serenity
prayer and the 23rd Psalm.

More than a year passed as I met with the rabbi
once a week, alone and in a small group. I rarely
went to synagogue. I am an introvert by nature,
and couldn’t seem to break into this Jewish
family in any meaningful way. Finally, Rabbi M.
told me it was time to pick a date for my official conversion ceremony.

Within days of the announcement, I received
devastating news. Aunt Jan, dearly beloved and
only 11 years older than me, had died
unexpectedly. My entire family felt this loss
deeply. I drove with my girlfriend to Oklahoma
to the funeral.

As I sat in the funeral home chapel, listening to a
sermon by a very inexperienced friend of my
uncle’s, I heard a voice say to me, “You can’t give
up Jesus.”

I turned my head to the left and to the right, but
no one was looking at me.

Again, I looked around and no one was paying
any attention to me. It repeated again, and
perhaps one more time.

The voice of the minister had faded. I wasn’t
aware of anything except that thought. I knew
to convert to Judaism was to deny Jesus. It
turned out I wasn’t prepared to do that.

Strangely, even in spite of hearing an audible
voice inside my head, I continued to be lost. I
searched on the internet for an acceptable
church. When I would find a local church that
accepted and endorsed the gay lifestyle, I would
get excited and go try it out. However, I never went back to any of those churches. It was as if
there was a heavy cloud over every single one of
them. It was like a giant room lit with only a few
25-watt bulbs. Any church that would accept me
as a practicing lesbian lacked all credibility with
me. I knew it was wrong, and having someone tell me it was right made me lose all respect for
their authority.

I began reading theologians in what is called
Progressive Christianity such as Marcus Borg and
John Shelby Spong. While their theology was
appealing to someone who wanted Jesus
without sacrifice, Christ without obedience, I was
still hungry. The intellectual spin was interesting, but didn’t sound the bell of truth in my spirit. I
had experienced a relationship with God when I
was a child. I longed to be deeply loved and
cherished by Him.